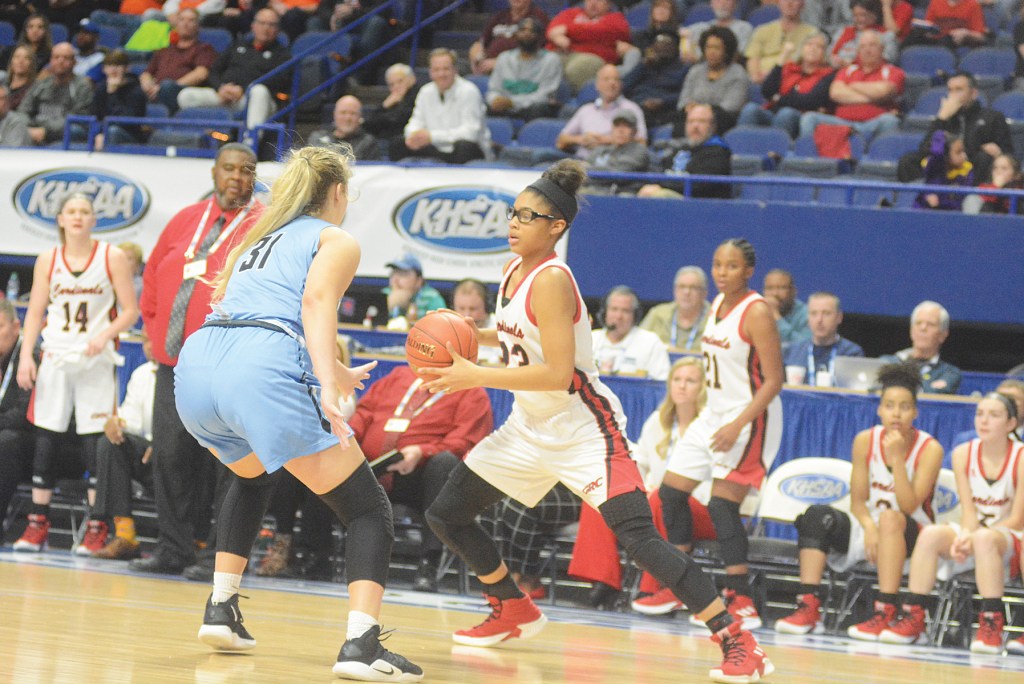 Brianna Byars drives to the lane in GRC’s 65-64 win over Mercy in the first round of the Sweet 16 state tournament at Rupp Arena Wednesday. GRC will face Ryle Friday in the Elite Eight. (Photo by Micah Satterly)

The George Rogers Clark Lady Cardinals survived the first round of the Sweet 16 state tournament against the Mercy Jaguars 65-64 in a nail-biter.

GRC had its hands full the whole game as it came down to the wire.

The game was knotted up 13-13 after the first quarter.

Mercy started to find its rhythm and led by as many as eight points in the second quarter and led 26-21 going into the locker room at halftime.

The Lady Cards shifted the momentum and started the second half on fire with a 6-2 run to tie the game 28-28.

Mercy nailed a three-pointer to go up 31-28 and Hayley Harrison drilled two threes in a row to retake the lead 34-31.

Brianna Byars stepped up off the bench and made GRC’s third consecutive three-pointer to extend the lead 37-31.

The Lady Cards finished the third quarter leading 46-41 and put up 25 points in the the quarter.

The Jags made two threes in a row to retake the lead 48-47 to start the fourth quarter.

GRC went on another 6-0 run with just four minutes left to play.

With the Lady Cards leading 59-50 and victory in the air, Mercy stormed back in the last two minutes and outscored GRC 12-4 to trail 63-62 with 28 seconds left.

The Jags had possession of the ball but GRC forced a turnover and sealed the game with free throws.

Mercy was unable to get a shot off on its last possession.

Kennedy Igo led the way for GRC with 14 points despite fouling out with three minutes left.

Bears and Shelbi Wilson both added 12 off the bench.

Graham said his team continued to fight despite having things not go their way in spurts throughout the game.

“The only thing we talked about was to play with a lot of confidence,” he said. “Don’t let one play snowball into two or three bad plays. Always play the next play and don’t let it be a snowball effect.”

Igo said it was weird seeing a lot of red in the sea of blue in Rupp Arena, but the fanbase helped tremendously during GRC’s strong second-half run.

“Them being loud helped us get our momentum,” she said. “They’re always great. I love having a big crowd, especially a GRC crowd. It was really great.”

Graham said he couldn’t put it into words on how sour the offensive fouls GRC was called made him.

“The little bit of hair I had left I was trying to pull it out but I couldn’t get a hold of them,” he said. “It was very frustrating. It is what it is. We had some whistles go the other way and you just have to battle through those things. Play the next play.”

Igo admits she is fault for making silly fouls.

“I’ve just got to let it go,” she said. “There’s no one else to blame but myself. I’ve got to play smarter next game.”

Graham said he is not surprised at all by GRC’s success thus far despite the injuries and set backs the team has faced this season.

“We’re a resilient bunch,” he said. “We’ve had some senior leadership and the goal was to get back here and give it a shot. Losses to Mercer County the last two years really stung and these girls were a part of that. The motivation as soon as we stepped on the bus was to just get back here and give ourselves a chance. It’s the next girl up. We have 16 players on the roster and coach one through 16. It’s not like we put some girls on the side and don’t coach them up. We tell them they’re a sprained ankle away from going from zero minutes to 10 to 12 minutes so you always have to stay ready. Stay focused and know what’s going on. We started the season on fire and went 5-0 and things went south. The resiliency of this group and the want to get back here and work is outstanding and they want to continue to get better.”