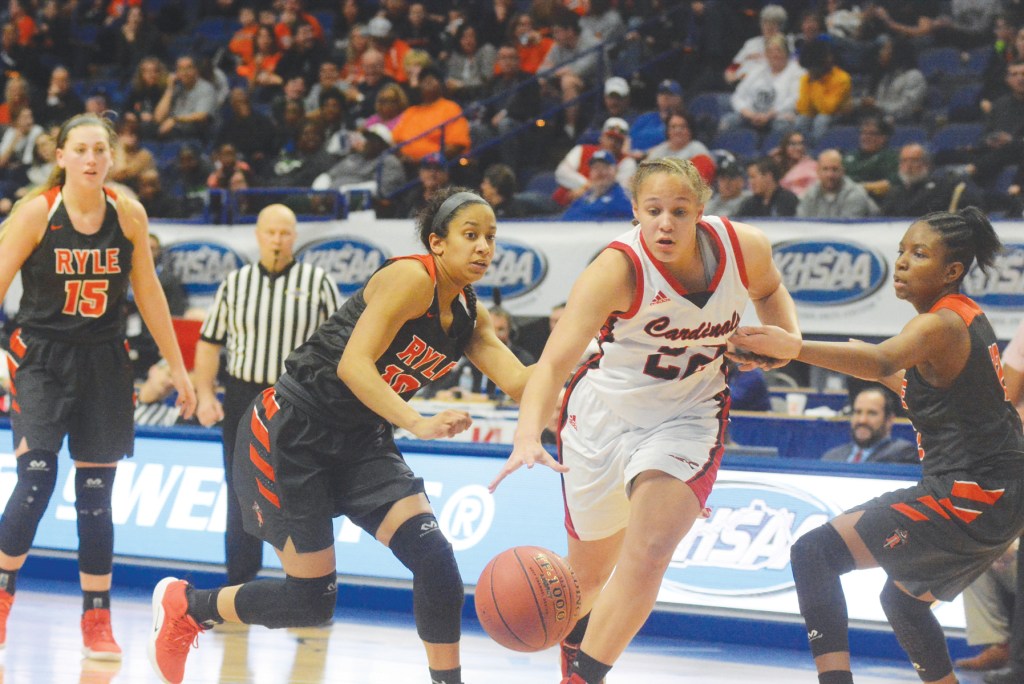 Tyra Flowers drives to the lane in the first half of GRC’s 64-51 loss to the Ryle Lady Raiders in the Elite Eight at Rupp Arena Friday. (Photo by Micah Satterly)

The George Rogers Clark Lady Cardinals had their season ended in the Elite Eight at Rupp Arena Friday afternoon to the Ryle Lady Raiders 64-51. Over 5,000 fans filled the stands to cheer on the two teams.

Ryle got the best of the Cardinals in a back-and-forth physical battle that was down to the wire until the fourth quarter.

The Lady Raiders started out hot draining two three-pointers within the first two minutes of the game and held the Lady Cards scoreless during that time.

Ryle led 15-14 at the end of the first quarter with Hayley Harrison scoring seven of GRC’s 14 points.

The game continued to stay close through the second as Ryle led 30-26 going into the locker room at halftime.

Jasmine Flowers led the way with 12 points at the half for the Lady Cards.

Ryle opened up the second half on a 5-0 run and GRC head coach Robbie Graham was quick to call a timeout as Ryle led by nine.

After the timeout, GRC went on a 5-0 run to bring the game within two possessions once again.

The story of the night was Ryle shooting an astonishing 28-30 from the foul line while the Lady Cards struggled at the line shooting 9-21.

Ryle had led by as many as 14 points in the contest which was a good enough performance to send the Lady Raiders to the Final Four Saturday.

Graham said the stat sheet tells the outcome of the game itself.

“It’s pretty simple just by looking at it how the game went,” he said. “We got out-rebounded 40 to 24. They shot 28-30 from the free throw line and we went 9-21. I think that kind of tells the story of the game. Ryle is a heck of a team and we knew that going in. I can see why (Maddie) Scherr is ranked top-20 nationally in her class. She’s a very good player. (Lauren) Schwartz and other girls stepped up and hit some shots and came up big for them. You know, they’re tough. Tough to defend and they do a good job on the defensive end as well. We knew it was going to be a tough task coming in.”

Scherr posted 26 points and 11 rebounds for the Lady Raiders and Graham admits she was the difference maker in the game after scoring only six first-half points.

“She definitely made top-20-in-the-country plays,” he said. “She got the ball and we tried to run her a little bit. She’s so long and tall and very crafty with the ball. She handles the ball well. She creates for herself very well and she’s talented. She made plays and she’s tough.”

GRC trailed going into the fourth and had opportunities to bring themselves back in the game, but Graham realizes missing a wide-open layup and missing numerous free throws only hurt themselves.

Senior Maleaha Bell said she is thankful for the experiences over the years with her friends and teammates.

“It’s been pretty great,” she said. “I’ve been with this team for a long time and they’ve been like sisters to me. I’m going to miss them a lot.”

“I’ve been here for fives years and I’m actually playing with my sister (Tyra Flowers) so this means a lot to me. For this to be the end of it, it’s just sad to say.”

Harrison said she was introduced to a new world when she started playing for the team.

“I came here my sophomore year and they opened so many opportunities for me. They made me feel like family and took me in. I’m forever grateful for that.”

Harrison was honored for the All-Tournament Team.