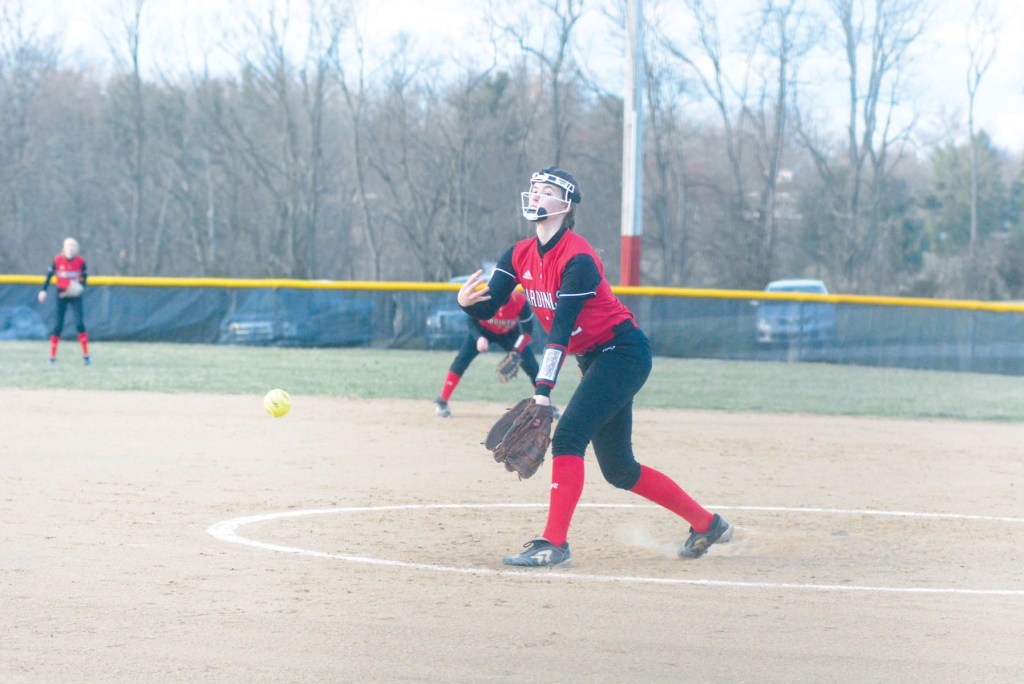 Emily Schooler throws a pitch in the third inning. She finished the game with 12 strikeouts in GRC’s 10-0 victory over Mason County Monday. (Photo by Micah Satterly)

The Lady Cards were prepared from the jump on both sides of the field.

Emily Schooler started on the mound for GRC and struck out all three batters for Mason’s first at bat.

Schooler pitched the whole game and finished with 12 strikeouts.

Kendall Harrison got the ball rolling for GRC as she captured an infield home run to give the Lady Cards an early 1-0 lead.

The second inning was loaded for GRC as they added three more runs.

Schooler started it with a double and eventually advanced to third from a Mason error and then was able to steal home.

A Christina Young single knocked the Lady Cards’ second run of the inning.

Harrison’s single for her second hit of the night sent Young to home plate for GRC’s third run of the inning and extended the lead 4-0.

It was another three up and three down for Mason as Schooler had two more strikeouts in the third inning and forced Mason to groundout.

For GRC’s next at bat, Schooler collected another hit and the Lady Cards added two more runs for the lead to drag out 6-0.

The fourth inning was another inning that was jam-packed as Lauren Carpenter added another triple and Harrison followed with a single to send Carpenter in to score.

Ashley Martin was rewarded with a double and Paige Caudill singled to send Martin in for the lead to stretch it out even further 9-0.

At the bottom of the fifth inning, Lydia Farmer was able to add another double to the stat sheet from another Lady Royal error.

Harrison singled to send Farmer home for the 10th run and ended the game.

Harrison lead the way with four hits and Schooler added two of GRC’s 12 hits in the game.

Head coach Daniel Rogers had no complaints in his team’s performance in the season opener.

“This is what we were hoping would happen,” he said. “Mason County is in our region and we wanted to make a statement right off the bat and I think we did that. It was our first game and there is still plenty to work on. It’s a long season so we’re going to try and improve every game. If we can improve on this tonight, then I think we’re going to be pretty solid.”

Rogers said he was particularly pleased in the effort his team put on defense and they are already looking better than this time last season.

“Emily (Schooler) was lights out,” he said. “She pitched a fantastic game. Our defense did really well, too. If you think about last year and when we started off, we were making seven, eight, nine or 10 errors a game. I don’t think we made any errors tonight and she had a ton of strikeouts.”

Rogers said he specifically talked to his team about how important fundamentals are before the game started.

“Fundamentals are what we worked on all winter,” he said. “Being fundamentally sound and making sure we can throw and catch is what it comes down to. We set goals for hitting on our offense and we did that tonight so we have to keep getting better each game.”

GRC will play four games in the next five days this week, two of which will be played at Western Hills and Estill County.

Rogers said he built a tough schedule this season and each game is just practice until the district tournament.

“It’s just glorified practice for the district and region tournaments,” he said. “We’ve got a really tough schedule this year. It’s a lot more tough than what it was last year. We’ve got several region champions we’re playing so we’re trying to get better every game. We want to make noise in the district.”