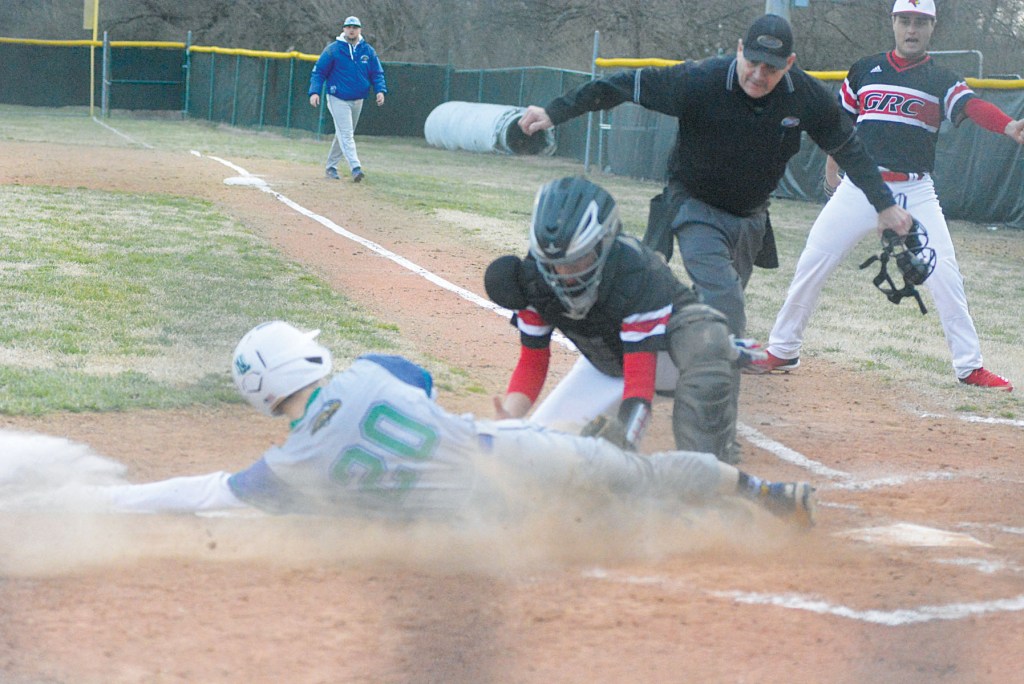 Catcher Brady Turner tags a North Laurel runner out at home plate in the third inning of GRC's 12-2 win in the first game of the season. (Photo by Micah Satterly)

George Rogers Clark baseball opened the season with a home win 12-2 in six innings against the North Laurel Jaguars Tuesday.

The Jags got took the lead early in the game at their first at bat.

The second batter in the lineup secured a double.

The runner was able to score after the next batter grounded out.

GRC’s bats were dry as the first two innings were three up and three down for the Cardinals.

Will Marsillett posted GRC’s first hit in the third inning after a bunt and was able to get on first base from an error.

The fourth inning was loaded and got the Cards rolling where they scored eight of their 12 runs.

Dakota Puckett activated the Cards with a single after a right-field error.

Brady Turner’s sacrifice bunt allowed him to be safe on first base and Puckett managed to secure third base.

After Turner’s pinch runner stole second, Caden Easterling was walked for the bases to be loaded and no outs.

Ethan Neal stepped up to the plate and smacked a single to score two runs.

Aaron Abner was walked for the bases to be reloaded.

After a strikeout for the Jags first out in the inning, two more batters were walked to allow two more runs and stretched the lead 4-1.

With the bases loaded, Chase Scobee doubled to score more runs after Trace Mitchell barely beat the throw to home plate and was called safe.

Puckett returned to bat for his second at bat of the inning and grounded out but still racked up an RBI.

Scobee somehow snuck his way down the line at third base and amazingly stole home for GRC’s eighth run of the inning.

Puckett, Abner, Neal and Easterling collected RBI’s in the sixth inning to run-rule the Jags and gave the Cards the first win of the season.

Head coach Matt Puckett liked how his team didn’t give up after falling behind early.

“I liked the way they stayed focused,” he said. “They got down early. We played a good North Laurel team and knew they were going to be a battle. The kids didn’t quit. I liked their focus, communication and that they didn’t give up when things looked bad. They kept fighting and knew they still had a chance.”

Puckett said his team executed its strategy to allow runners to get on base and in scoring position to which allowed his team to get back in the game.

“We started executing our small game,” he said. “We did a few things to get the ball down and made them make plays. We laid a couple bunts down that were nice. A stolen base or two and made them move more or less in open gaps and punched the ball through holes. In the first couple innings, we were hitting it hard but it was right at them. It was a couple of things and adjustments that made the difference.”

The Cards will have one day of rest before returning to the field Thursday.

Although the bats were swingingly nicely in the middle of the game, Puckett said batting will be a main focus to prepare.

“We’re going to take some batting practice on the field Wednesday,” he said. “We’re going to work on moving runners in situations. We had a couple of chances tonight to advance runners and it didn’t happen. Again, it’s the first of the year and you have to expect the pitching to be ahead of the hitting and I thought it was. We did hit the ball fairly well and I thought they did, too. We’ll just go back and hit tomorrow, go over bunt plays and prepare for the next game.”