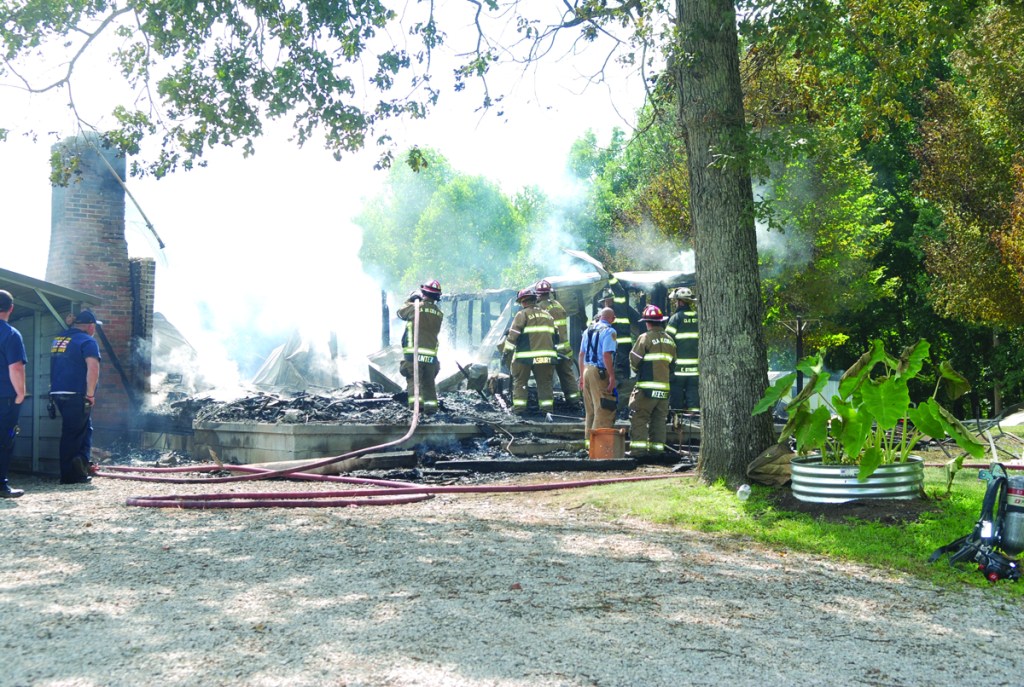 Firefighters pour water on a smoldering house on Cunningham Lane in eastern Clark County Tuesday afternoon. One of the residents, a man, died in the fire. The cause is still under investigation. (Photo by Fred Petke)

A Clark County man died Tuesday afternoon after his home caught fire and burned to the ground.

Officials had not released the person’s identity at the scene.

“We … saw the smoke almost as soon as we left town,” Barnes said.

The single story home was still burning heavily when the trucks arrived, and eventually collapsed from the fire, he said.

Barnes said there were two people in the home when the fire was reported. One got out without incident, but the initial reports were that the man went back inside the burning house, he said.

Eventually, firefighters from Clark County, Winchester, Clay City and Hargett Fire-Rescue near Irvine responded, along with an arson and explosives investigator from the Kentucky State Police.

Barnes said he does not suspect foul play was involved, but the debris indicated there may have been an explosion of some type. The residents used home oxygen, he said, but did not know if that was a factor in the fire.

Barnes said late Tuesday afternoon that he had not been able to interview any of the neighbors yet.

The remote location also played a factor, he said. The house was at least 20 minutes from downtown Winchester with limited access to water. Clark County and other departments sent their tanker trucks to the scene to assist.

The Clark County Coroner’s office also responded to the scene.