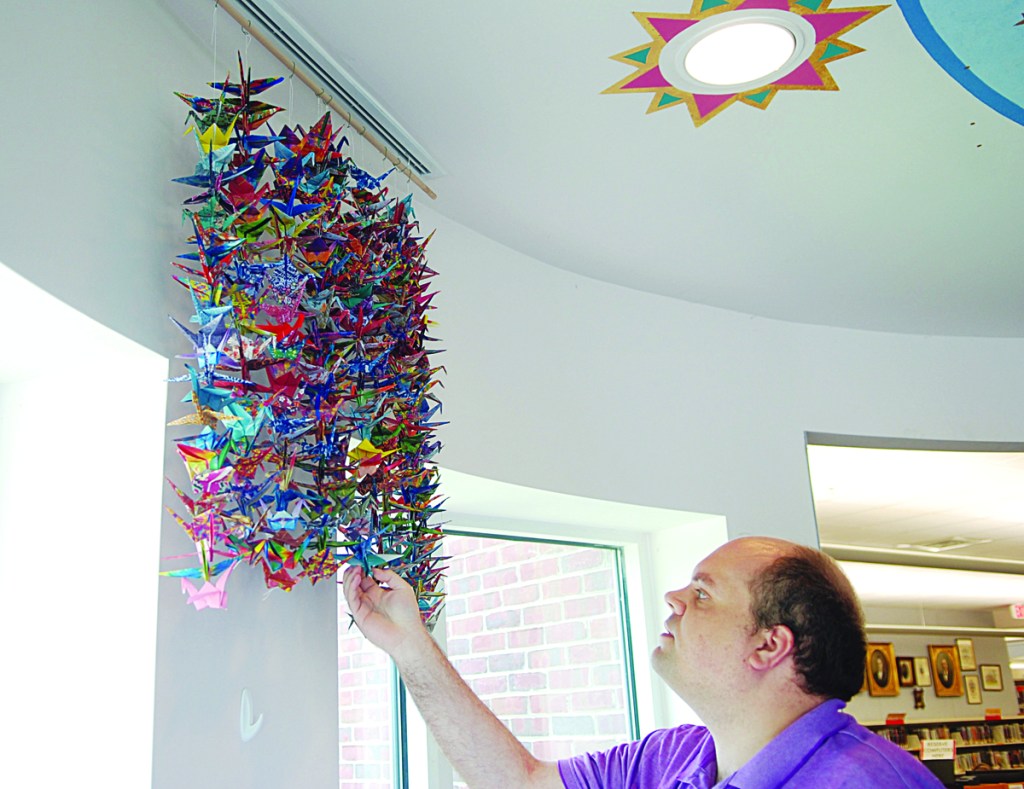 Reference librarian Brad Allard tweaks some of the 1,000 origami cranes residents made as part of a summer project at the Clark County Public Library. The cranes will be shipped to Japan later this year as a symbol of peace.(Photo by Fred Petke)

More than 1,000 origami cranes will soon make their way to Hiroshima, Japan, as a peace offering from Clark County residents.

The project started earlier this summer by Brad Allard, a reference librarian at the Clark County Public Library. Long a student of Japanese culture, Allard said making 1,000 cranes is a a symbol of peace in modern times.

“I’d always wanted to do a project like this since I started teaching origami to the adults,” Allard said.

Allard learned origami, the art of folding paper to form objects, while spending a year of his graduates studies in 2014-15 in Japan as an exchange student, he said.

“I volunteered at the library on campus,” he said. “A lot of the volunteers were really into origami. They offered workshops for the international students. Once I came back to the U.S., I taught my parents.”

Allard continued after he started at the library in 2017.

Making cranes is a fairly simple process; beginners can usually make one in 10 minutes or so, he said.

Allard said he lost count of how many people made cranes for the project, and how many he made himself. The 1,000th crane was made July 29. Most of them have been hung and are on display behind the library’s reference desk.

Later this year, they will be shipped to the Children’s Peace Monument in Hiroshima, where one of the two atomic bombs was detonated.

“They accept bundles of cranes from around the world and share them as an offering of peace,” he said.

The library still has supplies on hand for anyone who wants to make a crane to send, he said.