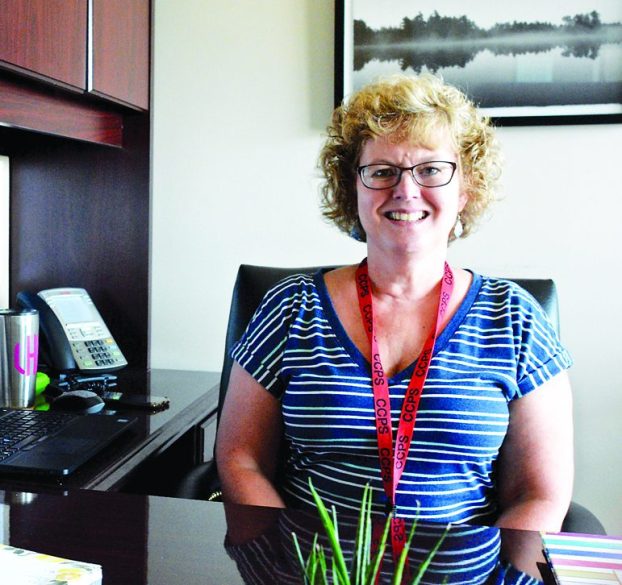 On the first day of school, Leslie Hammer wore her black, thin frame glasses, opting for those instead of contacts.

“I had a parent who … since I had her child in class has become a close friend,” Hammer said. “I used to wear contacts, and sometimes I would wear my glasses if I was running behind or whatever. And her son had come home that day. And he goes, ‘boy, I think today Miss Hammer meant business. She wore her glasses today.’ And so I’ve followed him through the years, and he started high school … the same day I started this, and so I messaged his mom. And I said, ‘Hey, tell him I’m wearing my glasses today. I mean business.’”

Hammer said there are many more moments like that throughout her years in education, and she’s ready to make more moments in her role.

Hammer first began her teaching career as a kindergarten teacher at Pilot View Elementary in 1994 after graduating from the University of Kentucky.

“I taught there for about three years and took some time off to stay home with my kids,” Hammer said. “Then, I went back to teaching.”

Now, Hammer is beginning her 18th year as an educator. She has taught both primary and intermediate grades at Pilot View, Trapp, Fannie Bush and Justice elementary schools.

“I was part of that original group of teachers that came over here, and I’ve been here since,” Hammer said. “I’ve taught kindergarten, first grade and third.”

She has served the last two years as a Read to Achieve intervention teacher.

Outside of work, Hammer is the cooking leader for 4-H. She also spends a lot of time with her family, especially outdoors. They like to garden, camp and get away to quiet places. Hammer also enjoys ropes courses.

Hammer completed her principalship in August 2018 at Georgetown College. She also holds another master’s in elementary education from Georgetown.

“It’s funny because growing up I would play school with all the neighborhood kids,” Hammer said. “I had a playroom that was set up like a classroom with a big chalkboard and everything. But I never grew up wanting to be a teacher. My mom was a teacher, but it was when I was in high school that I had a teacher who impacted me in a lot of positive ways. I can remember beginning college thinking there need to be more teachers like him. That inspired me to want to become a teacher.”

Over the years as a teacher, Hammer took on additional responsibilities serving in various leadership capacities, whether it be at the district or school level. She served on the superintendent’s council, the district leadership team, school site-based councils and more.

“I’ve done a lot with curriculum, as far as leading grade-level meetings of different things,” Hammer said. “I just enjoyed being in that role. I enjoyed working with teachers closely, and … helping them do new things, but also being able to work with students of all ages, not just a specific grade.”

In her new role, Hammer said she’d like to see Justice achieve its Lighthouse certification as a Leader in Me school.

“Our school is unique in the sense that we’re the only Leader in Me school in the district,” Hammer said. “We are currently in the process of trying to achieve Lighthouse status. It’s a big deal. We’re very close to that. So, I’d like to assist [Principal Susan Hillman] in achieving that.”

Hammer said she would also like to bring more literacy programs to Justice as well as just helping teachers and students with academic progress.

“Ideally, we’d love to be the top school in the district,” Hammer said.

As a leader, Hammer said she enjoys communicating with teachers, parents and students. She said she’s a good problem-solver; she’s organized and enthusiastic. However, Hammer said she anticipates time will be a challenge as there never seems to be enough of it to get everything done. Hammer said she would likely spend most of her first year learning her new role.

Hammer said she hopes her students know she always wanted them to achieve and reach their fullest potential, that no matter what circumstances they may be growing up in, or have seen or been a part of, the possibilities are endless.

“By working hard and making good choices through life, you can achieve great things,” Hammer said. “I’m getting to a point in my career where I’ve seen students that were my kindergartners that are now adults. It’s been neat to see where their paths have taken, some of them that I’ve been able to keep in touch with and maybe have stayed local. That’s encouraging.”

Hammer said she wants the community and her Justice family to know she has an open-door policy.

“I’m very approachable, easy to talk to,” she said. “Bring ideas to the table. If you have ways that you would like to be involved in our school or ideas that you have … I want to be there to help.”

Hammer said she’s excited to continue the school year wearing her glasses, meaning business; though she likes to have fun, too, she joked. Overall, it’s been a great start to the school year.

“Everybody’s very encouraging, very positive as far as me moving into this position,” Hammer said. “I feel very welcomed.”

Once every decade, the federal government conducts a count of everyone living within the United States. In the short term,... read more