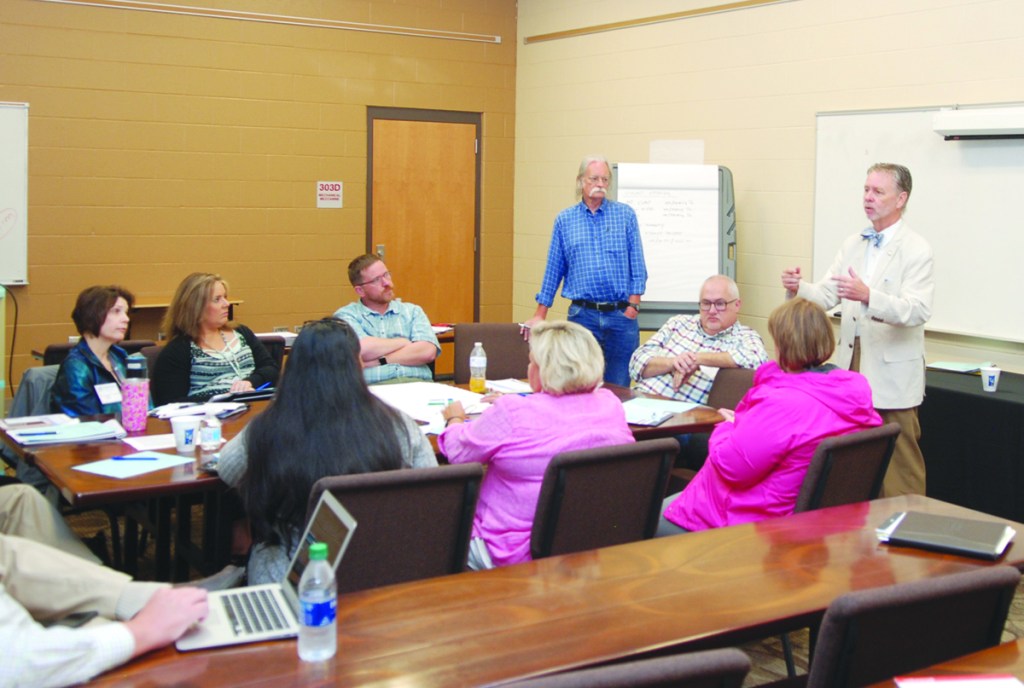 Georgia juvenile and superior court judge Steven Teske speaks to a group Tuesday during the second day of a school-justice partnership meeting at George Rogers Clark High School. Teske said the program is designed to give communities a way to reduce crime from juveniles by working with students before they get to the court system. (Photo by Fred Petke)

A diverse group of Clark Countians spent the last two days looking for ways to improve the relationship between schools and the court system to reduce the number of juveniles going through court.

The program started in Clayton County, Georgia, about 15 years ago when Juvenile Court Judge Steven Teske noticed the sheer number of referred cases.

“I recognized, sitting on the bench, that there were too many school-related cases referred to me,” Teske said Tuesday. “What i learned about those cases, they made up one-third of all the delinquent cases in my court.”

That realization sparked the nucleus to develop a school-justice partnership in Clayton County, he said. Fifteen years later, Teske and a support staff have presented the program in more than 40 states. They have been in Clark County since Monday, presenting the program to a group of court officials, school officials and others at George Rogers Clark High School.

The goal, he said, is to develop a local plan with alternative resolutions for minor infractions, rather than sending everyone to court.

“If a community wants to reduce recidivism, the first step is to make sure the system isn’t doing anything to make it worse,” Teske said. “It’s not about what tough (on crime) should look like, but it’s about preventing crime.”

“Our felony filings… are down 64 percent,” he said. “There are 64 percent fewer victims in my community.”

Clark District Judge Earl-Ray Neal said he heard Teske speak at a conference, then took a group to Georgia to attend a workshop.

“His approach to juvenile justice seemed to be in line with the kind of judge I wanted to be,” Neal said. “The fight we all fight is to make sure kids with discipline histories don’t end up with criminal histories.

“What we’re trying to do with this program is get involved in children’s lives at an earlier stage before they’re in the criminal justice system.”

Colin Slay, the director of operations for the Clayton County Juvenile Court, said the first day has participants identifying problems and issues locally, and the second is spend coming up with alternatives from the court system. At the end, those involved will have a path to establish a School-Justice Partnership program locally.”

“They brought a lot of people,” Slay said of the Clark County contingent. They already have some relationships established. That’s not always the case.”