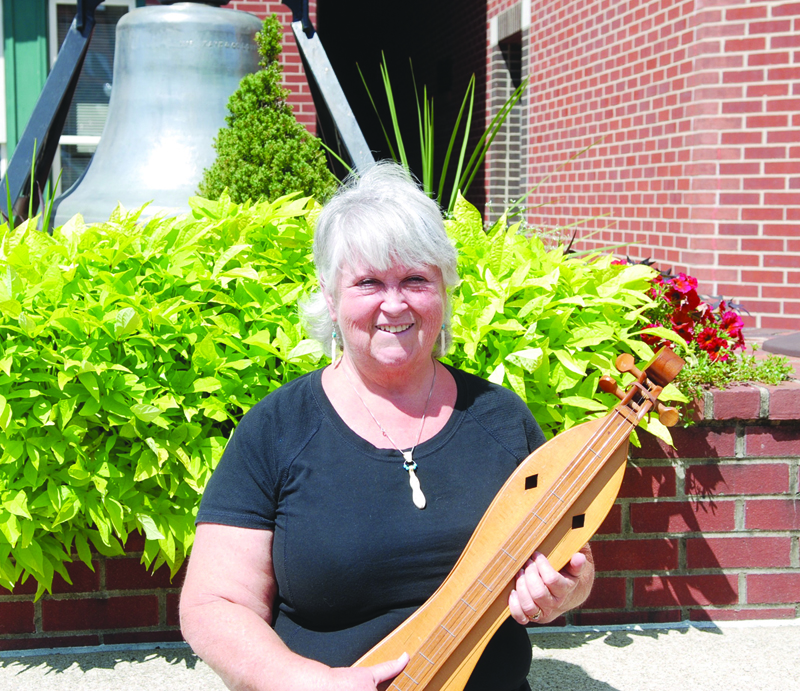 Dana McCall picked up her first dulcimer a decade ago.

After always wanting to play a musical instrument, she finally found hers.

Her love for the instrument and an acquaintance with Winchester musician and luthier Homer Ledford inspired her to create the Homer Ledford Dulcimer Festival in Winchester.

Now in its seventh year, the event brings instructors and musicians alike to Campbell Junior High School on Labor Day weekend for a day of classes.

On Saturday night, there is a public concert in the school auditorium.

Winchester Sun: How long have you been playing?

Dana McCall: I’ve been playing the dulcimer almost 10 years. I’d be a lot better if I’d been practicing more.

It’s a lot of comfort and a lot of fun.

DM: I come from a family that half of them could play by ear and the other half couldn’t tune a radio. I was on the side that couldn’t tune a radio. I always wanted to be able to play a musical instrument. We were at the Clark County Fair and I saw a bunch of ladies sitting in a circle and they were playing mountain dulcimers. I had never seen one before and I just thought they sounded beautiful. My husband and I went to a tractor museum at the Irvine Museum up in Irvine and there was a man sitting inside who had made some dulcimers. I bought one from him. At the time, I didn’t know one would turn into several. I went home and started plunking out on it by myself. I could play a few tunes. I found out we had a dulcimer club in Winchester, or we did at that time. I went to a meeting and no body had showed up that night. I sat out at (College) park … and started picking around with it. A lady walked up and said, “I’m with the club and no one showed up tonight.” She and another gentleman sat there and showed me how to play my first real song the right way. I played ‘Wildwood Flowers’ within about 15 minutes.

WS: How many dulcimers do you have?

WS: Where do you find them?

DM: Actually, I got on the internet for a while. I was looking on craigslist. I wasn’t specifically looking for Homer Ledford dulcimers, but I wanted at least one because he was from here in Winchester. I know Colista (Ledford, Homer’s wife). I didn’t know Homer that well. I met him a couple times before he passed away. I got on the internet. I don’t like to pay a lot for them. I found two in a thrift store in Cincinnati. I got one for $50 and one for $60. They didn’t know what they had. It just snowballed from there. People now will call me and ask me if I’m interested in one. If it’s something different that I don’t have, then I am, but I have several that are pretty similar. I have some that are really pretty with inlay in them. The one I brought today is one of my oldest. It’s one of his first 100 built. It’s my prized possession. They’re very hard to come by.

WS: Do you travel to many festivals?

DM: There are a lot of festivals. Just about every county has a dulcimer club, but not every county has a festival like I put on with the Homer Ledford. I just got back from one at the end of June. Nancy Barker in Bardstown puts on a great one. It’s a week long. We had 600 dulcimer players … all gathered at one school at one time. It’s really something to walk around a corner and … around every corner there’s someone playing music. During breaks between classes, they will be out and play music in the hallway, in the gym and in empty classrooms.

WS: Why did you start the Homer Ledford festival here?

DM: IT wasn’t something I’d really thought about at the time I did. I was contacted by the Leeds Center for the Arts. They asked me about putting on a festival. They didn’t have a concept of what a (dulcimer) festival was and it wasn’t a big money maker. After that first year, I started doing it on my own. It wasn’t a great time in my life because I was caring for my father who has Alzheimer’s. But I did everything over the phone. We had almost 50 people come the first year. It’s been up and down since then. This year is going to be a good year. It’s the first time I’m going into the festival in the black. (McCall said any funds left over go to the music program at Campbell Junior High School.) I almost quit it in 2015 because I lost my sister and I was diagnosed with stage 3 cancer. I didn’t know if I could handle it. If it hadn’t been for my family and some good friends that helped me get through, the Homer Ledford Festival might have stopped in 2015. I lost my father that year too. But it’s gone on, and it’s gotten better. It’s been fun doing it. It’s kept me going. Music, I think, is therapeutic. It’s good for the soul. When I’m hope with my father especially, I was kind of a recluse for five years. The mountain dulcimer and my painting … kept me sane.

WS: How many people have signed up for this year?

DM: I’ve already gotten over 30 registrations in the mail. That’s good because I usually get 10 to 15. With 30 registrations, I’m hoping to break 50 this year. It’s nice to have a small festival, the classes aren’t too big. Everybody that’s come said they really enjoy it, and that means a lot to me. I meet people I’ve met them for years and still might not know their first name, but we all know each other and its like a family. It is a really friendly atmosphere.

For more about the festival and the instructors, go to homerledforddulcimerfestival.com.