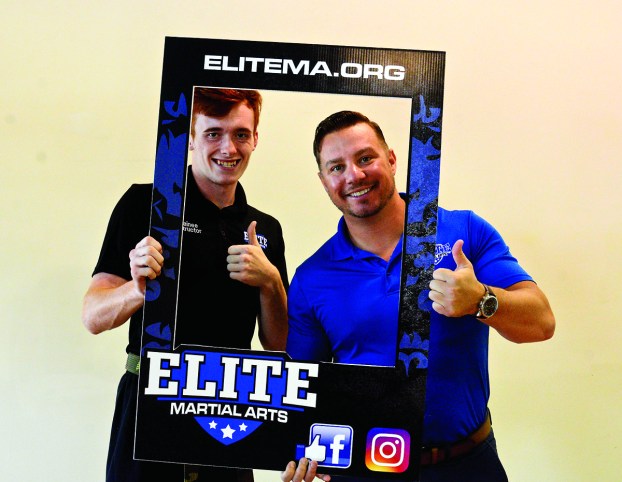 In 1987, Will Schneider’s father picked him from kindergarten.

“There’s a karate school opening in town, you want to check it out?” Schneider’s father asked.

Off they went, Schneider recalled, and at age 5, he started learning Taekwondo under a Korean master. He earned his black belt at 7 in 1989, and in 1996, he was inducted into the World Martial Arts Hall of Fame.

Schneider, who was born in Rockcastle County and raised in London, worked as the director of the YMCA in London. He then became self-employed at his first dojo in 2002 at age 21.

Schneider purchased a martial arts studio in London from his father in 2002.

“He made me an offer, and I bought him out,” Schneider said.

In 2009, Schneider rebranded the studio to Elite Martial Arts and since then, has expanded to Berea, Richmond and now Winchester.

“I think we’re about 20 employees right now between the three branches,” Schneider said. “… Everyone here has got great attitudes. You’ll see that in our dojos. A lot of schools you go into, it can be intimidating for a new person… And for us, we will make it a welcoming, inviting, one team.”

Schneider officially opened the new location in late August at 150 Redwing Drive, next to Dancer’s Pointe. While the space is still relatively empty — Schneider said the finishing touches are arriving soon — there is already a waiting list as slots for Elite’s after school program filled up quickly.

Elite is a full-service martial arts academy; it offers an after school program, summer camp and regular classes for adults and children in the community.

“If your kids are in the after school program, if you’re a mom or dad, you get the kickboxing class for free,” Schneider said. “So we want a family environment… we want the families to train together.”

Schneider even encourages parents to stick around and watch the class as it’s rewarding to see students learn the art.

Every member of Schneider’s family, including his four younger sisters, learned martial arts.

“We went to karate together,” Schneider said.

Schneider’s mom, who was a tattoo artist, took it with her children, and Schneider would ride on the back of his father’s motorcycle on the way to karate class.

For its after school program, Elite provides transportation from school to the academy.

Every two months or so, students in the after school program focus on learning new life skills. Schneider said the latest topic is health. So, Winchester’s instructor, Dylan Mays, talks to his students every day about health and how each student can work on being healthy overall.

Throughout the year, Schneider said he likes to connect the branches through social outings such as Elite’s annual pool party, picnic and more.

During the all-day summer camp, students go on field trips while also learning martial arts and other skills.

“In addition to those services, we also do regular kids martial arts for ages 3 and above,” Schneider said. “So we have a 3- and 4-year old Little Ninja class. And then we have our regular martial arts class after that.”

Schneider said learning martial arts at a young age can help children build confidence and self-esteem; it can also teach them focus and perseverance. It also keeps children active.

“Our big thing here — we’re definitely not a fight school whatsoever — is making people excellent black belts and then excellent leaders where they become instructors,” Schneider said. “They teach and pass on the martial arts as well. And if they want to compete, they can do that, too. We offer competitions and such, but it’s not our main thing. Our main thing is developing excellent black belts.”

Schneider said his favorite part about instructing children and owning Elite is tying a black belt on one of his students. He also loves training new instructors.

Schneider said Elite has trained a few world champions; some of his students in other locations have competed at Walt Disney World or the International Martial Arts festival, bringing home world titles.

“We have one kid, Bethany, who’s now 13 years old, she’s a three or four time world champion,” Schneider said. “… That’s another cool part of what we do.”

Schneider said he also enjoys hearing stories from parents about how much their child enjoys coming to Elite.

“Whenever parents come up to us and they say, ‘Hey, my kid has tried every sport there is, but they love this,’” Schneider said, adding it means Elite is doing its job well.

The new Winchester location is one step in a plan to open many more. Schneider said for people interested in classes or the after school program, go to elitema.org. The adult classes are beginner friendly and run about $125 a month, but Elite is currently running a $99 a month special. The after school program runs about $70 a week, he said, and the summer camp ranges around $130 a week. All prices are subject to fluctuate, he said.

“We want to see this one kick butt and do its thing,” Schneider said. “… Lexington would probably next… Our goal is that we will make our community fit, safe and successful through the martial arts and martial arts lifestyle.”

Attorneys for murder suspect Matthew Carmen say they will not be ready for the upcoming trial, citing volumes of evidence... read more