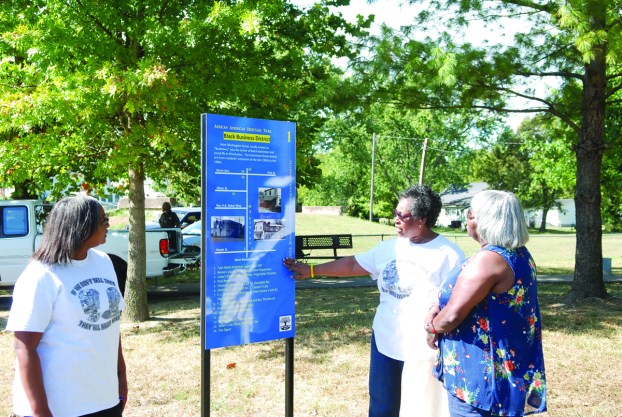 A new trail aims to fill some of the gaps in the history of Clark County and its people.

“Today we are celebrating our first African-American history sign in Clark County,” Brenda Smith said. “It gave us the opportunity to tell the story.”

The story of accomplishments by African-Americans in Clark County has gone unrecorded or untold in some instances for decades.

Jane Burnam, a former teacher with a passion for African-American history, said the process of developing the trail was a spiritual journey.

“I can see change,” she said. “We’ve had nothing but good things today. Knowing your heritage is empowering.”

The project started several months ago between the Winchester Black History and Heritage Committee and local historian Harry Enoch.

“We’re dedicating this trail to tell part of Winchester and Clark County’s history that’s not been told,” Enoch said. “We felt it was time.”

“If we don’t tell them, they will never know,” said Roz Gay, a board member for The Greater Clark Foundation, which contributed to the project.

In all, eight markers will be installed at these locations:

— Washington and First streets, focusing on communities after the Civil War.

— 30 Oliver St., about local athletics within the African-American community.

A sign with a map of all eight sites was placed behind the Clark County Courthouse on Wall Street.

Ron Davis, a Winchester native, said Clark County had a long history with slaves; in 1860, 40 percent of the county’s population were enslaved.

“Now we’re here dedicating Winchester’s African-American Heritage Trail in recognition of their presence and continuing contributions of enslaved people and their descendants,” Davis said. “This trail is part of our roots. The marker gives a point of how our roots emerge.”

A potential risk could be as simple as your child having more than one calculator app on their phone.  Melissa... read more