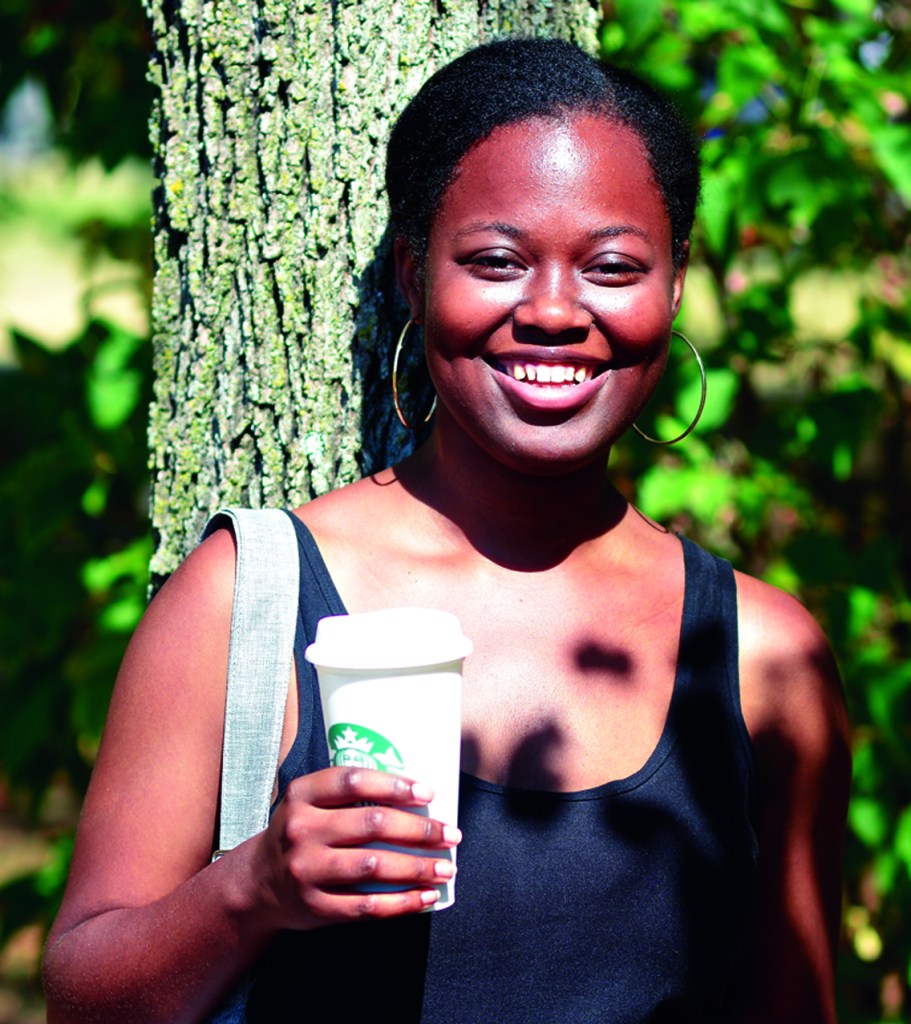 Kena Dijiba is author of “Millennial Vegan,” a cookbook sharing a variety of vegan recipes. (Photo by Lashana Harney)

For the longest time, “Millennial Vegan” was just a tiny idea on Kena Dijiba’s “cringy vision board” taped to her bedroom wall.

Now, it’s real. It’s tangible and it isn’t the typical cookbook. It is dramatic, and not so accurate, Dijiba said. It’s funny; the recipes are tasty, easy and “cheesy.”

But it’s also more than all that, Dijiba said.

For Dijiba, writing the cookbook was a way to prove she could do anything she wanted to, especially after what she called some of the toughest times of her life.

At 3 months old, Dijiba, who was born to an immigrant father from Congo, Africa, and an American mother, and her family moved from Oxford, Ohio, to Albuquerque, New Mexico.

Then, at 8 years old, Dijiba moved to Winchester with her mom and brother. She went on to graduate from George Rogers Clark High School and applied to dozens of schools and got into almost all of them.

Dijiba said she didn’t grow up with much money, and at the time she worked at McDonalds so her idea didn’t end up being the reality.

“I was under the impression that I was going to go to college in New York,” Dijiba said. “And that was against the wishes of my father because in African culture, they want you to be doctors. So my wanting to be in the arts and drama, acting and stuff, that wasn’t appreciated. But then they ended up kind of accepting it. And then I couldn’t go because the loan was too much; it was $60,000. I don’t want to say that dream was crushed. But it was just you had to have an alternative dream.”

Dijiba then made the choice to go back to New Mexico, the home she had not seen for 10 years.

“So I ended up going to New Mexico because the tuition was a lot cheaper, and it was still out of state,” Dijiba said. “I just wanted to get away.”

When Dijiba went to the University of New Mexico, her life was new again. It was her first time on a plane at the age of 18, and she was alone in the desert town of opportunity. She started studying journalism, and for a while, everything was OK.

Though, deep down, Dijiba said she was never certain of what she wanted to do.

“I never thought of having like a practical job, if that makes sense,” Dijiba said.

She mulled over journalism, film, acting and more.

“To be honest, I’m someone who wants to be like a million different things,” she said.

Dijiba said she felt like school wasn’t her path, and in many ways, self sabotaged.

“Even during school, I was depressed because I wasn’t doing what I wanted to do,” Dijiba said. “I wasn’t even trying to accomplish my goals. I was … waiting on something to happen for me, to me.”

She stopped going to classes in her second semester. She lost her scholarship.

“School is the main thing that they teach us, that you have to go to school to be a success, and if you don’t, then you’re just like, what are you going to do?” Dijiba said.

At a loss, Dijiba ended up back in Kentucky.

“I ended up dropping out and coming back,” she said. “… It was a depressing moment. You’re questioning everything. And even though I wasn’t fond of school, I still learned some good things that helped me now.”

That time of her life had to be the hardest yet, she said.

“When I came back, it was like a smack in the face because when you leave here, and then you come back, you’re like, ‘Oh my god, I failed,’” Dijiba said. “… I tried to leave and it didn’t happen. So I came back, and I was depressed. And for a long time, I was in my room, just not doing anything. And with depression… I didn’t realize I had depression until I got out of depression because I thought… depression wasn’t sadness. For me, it was hopelessness.”

As the new year rolled around Dijiba said she made the choice to get up, to set goals and visualize what she wanted, putting it to actions behind her words.

And on her 20th birthday, Dijiba decided to go to therapy.

“It changed the entire scope of my life,” Dijiba said. “…. I told my father and my uncle. and I was like, ‘I feel like I need to go to therapy’ and they’re like, ‘go out, run, exercise. You won’t be sad. You won’t be anxious anymore…’ But I went to therapy, and I met my therapist literally on my birthday.”

Her therapist inspired her to create a vision board.

“When you visualize something and you see it every day, you start accomplishing things,” Dijiba said.

One thing she put on her vision board was writing a cookbook. Dijiba, who now works with a company cleaning offices, is a vegan and has been for four years after making the transition from being a vegetarian for two years. Dijiba first went vegetarian with her cousin and then they later both transitioned to veganism.

Growing up, Dijiba said she didn’t have a great relationship with food. She grew up eating canned food, fast food and everything “unhealthy.”

“When I went vegan, my skin totally cleared up,” Dijiba said.

The idea for the cookbook came from her dream of possibly opening a restaurant one day. She already loved food and found a passion for cooking after becoming a vegan.

Dijiba self-published her first book ever, “Millennial Vegan,” in August, and from there, Dijiba submitted two copies to the Clark County Public Library for people to check out. Dijiba said she tried to put a lot of her personality into her cookbook, which has more than 20 recipes, adding humor and sarcasm into the book.

“It’s like if I was with you, and you were like my friend or my homegirl, and I’m telling you what to do,” Dijiba said. “It feels very personal. And it’s easy to understand… I’m not having you put a gazillion different spices that you can’t find from all over the place from Whole Foods. No, it’s simple. Anyone could probably make anything that I put inside of there.”

Dijiba said the book is also available on Amazon as an e-book or hard-copy for $6.99. Dijiba’s book even appeared on PETA’s “Must-Have Vegan Cookbooks of 2019.”

Dijiba said the actual process of writing the cookbook took only two weeks; though, it was a hectic two weeks, she said.

With hardly any money to invest into the project, Dijiba said she just did the best she could, and she’s proud of the end result.

“I’m not gonna say I have the most amazing book in the world because I’m not delusional,” Dijiba said. “It was the best I can do, that I could do… I’m proud of my book. I’m proud of what I made. I didn’t have a lot of stuff to make it, and the fact that it’s even out is crazy.”

Dijiba said she hopes to show people there are different types of vegans out there; and she never wants to push veganism onto anyone, but she hopes vegans and nonvegans find tasty recipes in her cookbook. She said her nacho recipe is one nonvegans will probably enjoy, and her personal favorite is the mac and cheese.

As for what’s next, Dijiba said she’s unsure. She hopes to be an entrepreneur, be her own boss and perhaps travel. She’s also working on a website where she writes monthly horoscopes, called Ghetto Astrology at ghettoastrology.weebly.com. She also hopes to share her art more.

“I’m just in a period of self discovery,” Dijiba said.