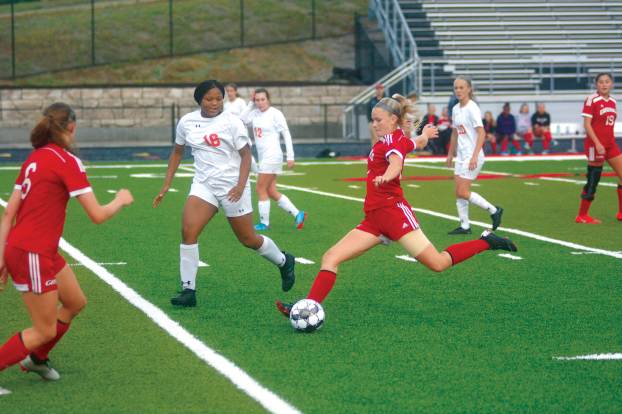 Senior Delaney Manning two goals and had an assist in Monday’s game against Paris in the 39th District Tournament. They were the eighth and ninth postseason goals in Manning’s time as a Cardinal. (Photo by Roman West)

After a stellar regular season, finishing 14-6-1 overall and 3-0 in district play, the George Rogers Clark Lady Cardinals soccer team got to host the 39th District Tournament.

The first round kicked off Monday night as the Lady Cardinals hosted Paris at the new Cardinal Stadium.

The regular season matchup was a blowout in favor of GRC, a 10-0 victory for the Lady Cards. Allie Bush and Ciana Araya each picked up a hat trick in the first matchup.

GRC matched their scoring clinic – and defensive shutout – in postseason play against the Lady Hounds with another 10-0 mercy rule victory.

Julia Pohl got the scoring started two minutes into the match with a goal coming off a Delaney Manning assist.

Bush and Araya then picked up where they left off against Paris, with Bush scoring from an Araya assist less than a minute later.

Leslie Hernandez, who didn’t play in the regular season matchup with a knee injury, was the next Lady Cardinal to score, putting in a goal a minute later.

Manning put her first goal of the game in thanks to a Pohl assist, giving the Cards a 4-0 lead with 24 minutes to play in the first half.

Shelby Vaughn became the fifth Cardinal to score after she followed a ball from Allie Eury that bounced off the keeper’s hands, giving Eury an assist and GRC a 5-0 lead.

The Lady Cardinals kept spreading the goals around as Nicole Davis put in a goal courtesy a Vaughn assist.

After a Paris goalie change, Davis welcomed the new keeper with another goal coming off an Araya assist.

The final goal of the first half came from Bush, her second of the day, to send GRC into the break with an 8-0 lead.

Manning, a senior, scored her second goal of her final postseason as a Lady Cardinal as Araya picked up her third assist to put the Cardinals one goal away from advancing to the championship game.

Davis completed her hat trick, finishing a corner kick from Vaughn, to give GRC the 10-0 win over the Lady Hounds.

The Lady Cards will play in the 39th District Championship game Wednesday, Oct. 9 at 6:30 p.m. at the new Cardinal Stadium. If GRC is able to win on Wednesday, it will be Abner’s sixth district title in seven seasons as head coach.

Cardinals struggle in second half against Cooper, fall 21-14

George Rogers Clark hosted their annual homecoming football game on Friday night in a game against the Cooper Jaguars. The... read more