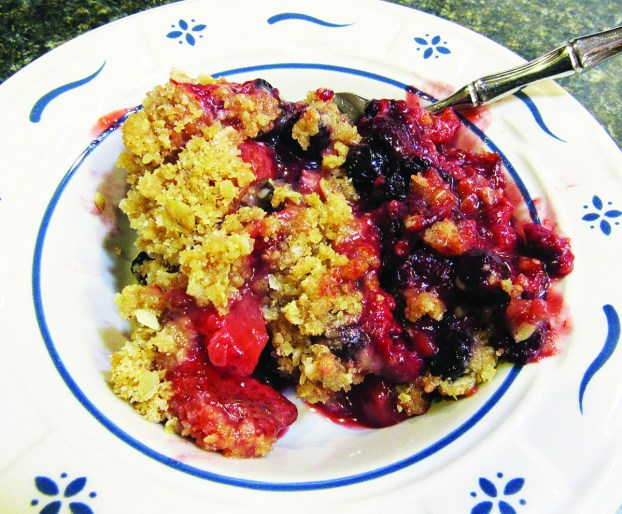 Nailed It or Failed It: Cast-iron berry crisp

I decided to make this recipe after I bought lots of strawberries at the grocery on sale.

While looking through my stack of dessert recipes I found this Cast-Iron Berry Crisp, which I’d torn out of the July/August 2019 issue of Food Network Magazine.

— Unsalted butter for the pan

Prepare the berries: Preheat the oven to 375 degrees. Grease a 12-inch cast-iron skillet with butter and set aside. In a mixing bowl, combine the berries, granulated sugar, flour, lemon zest and balsamic vinegar. Pour into the pan and smooth into an even layer.

Make the topping: In another mixing bowl, mix both sugars, the flour, oats, cinnamon and salt. Cut in the butter until you have a coarse crumb and the flour is fully hydrated. Sprinkle this mixture evenly and loosely over the top of the berries. Bake, uncovered, until golden brown, crisp and bubbling, 35 to 40 minutes. Remove from the oven and let sit at least 10 minutes before serving.

The recipe calls for fresh berries, but frozen work just as well.

I headed to the freezer and found blueberries, blackberries and raspberries. Instead of choosing between blueberries or blackberries, I decided I’d use both.

I pulled out my two big cast-iron skillets and measured them. They are both 10 inches instead of 12 inches. I thought I could just make it in a 9 x 13 inch baking dish, but decided against that since part of the charm of this recipe is making it in cast iron.

I have a couple of small cast-iron skillets, so I decided I’d make a big crisp and a little crisp.

I turned on the oven then buttered each skillet.

In a large mixing bowl, I poured in about a cup and a half each of blueberries, blackberries, raspberries and the strawberries I’d just cut up.

I gently tossed the berries and then scooped the majority of them into the larger skillet. I put the remaining berries in the small skillet and started mixing the topping ingredients.

After the sugars were in the bowl, I added the flour and went to the cabinet for the oats. I didn’t have any old-fashioned oats, but I did have quick oats and measured out what I needed, hoping they would work in this recipe.

I sprinkled in the cinnamon and salt, then started cutting chunks of butter off the stick and let them fall on top of the dry ingredients. I used a pastry blender to combine the ingredients until the butter was fully incorporated.

The last thing to do was sprinkle the topping over the two cobblers and put them in the oven.

When the timer sounded, the two dishes were browned and bubbly. They smelled so good I didn’t want to wait for them to cool before trying some. But it was time to head to church for prayer service so I held off.

Since Brad and I didn’t need to eat all of this cobbler we decided to take the small one to Mike and Teri, some of our friends. We told him we hoped he enjoyed it and that he could share with his father-in-law, Mr. Poer, who is also their neighbor.

When we got home from church, we ate a quick supper then scooped cobbler into bowls. Brad had his without heating it back up. I heated mine and added ice cream.

This cobbler was different. We could taste the lemon and the balsamic vinegar.

We liked the variety of berries in the cobbler and the topping was great, even with the quick oats. Brad said the cobbler was a little tart and he liked that it wasn’t too sweet.

This cobbler was good, and I had to share it. It took some to a co-worker and she agreed that it was good, but different. Like Brad, she said it was a little tart, but she liked that.

Mike did share with his father-in-law who said it was delicious. Brad took some to his physical therapist and she agreed it is a winner.

This cobbler got thumbs up so it has a spot in my self-made cookbook.

Nailed It or Failed It: Chicken and shrimp fettuccine

By Sarah Condley I  found today’s recipe at tasteofhome.com. The recipe sounded simple and the picture, though small, looked pretty... read more