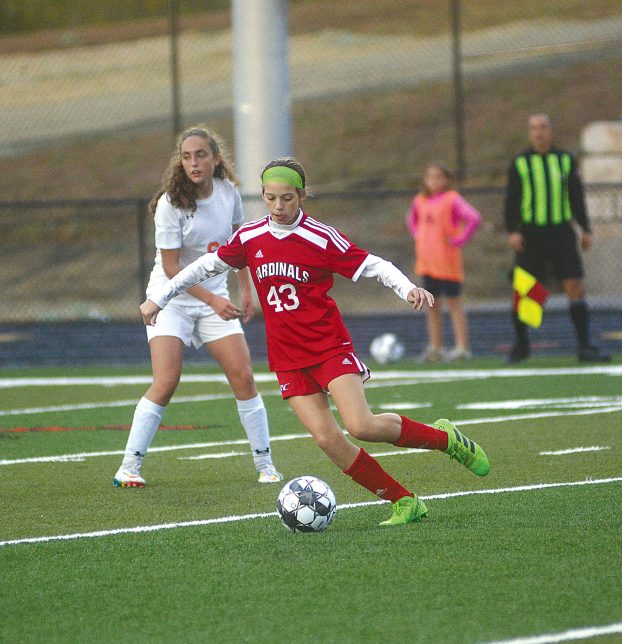 Freshman Rivers Gilkison got her first taste of postseason soccer on Monday in GRC’s matchup with Paris. (Photo by Roman West)

After beating Paris 10-0 in the postseason opener, George Rogers Clark’s girl soccer team is headed to the 39th District Championship.

Since joining the 39th District in 2012, GRC has advanced to the championship game in every season, winning six of the seven titles including three straight.

The Lady Cardinals are set to take on Montgomery County in the final after the Indians beat Bourbon County 3-2.

The two teams faced off in the regular season, with GRC coming away with a 5-1 victory. The Montgomery County goal was the only goal the Lady Cardinals allowed in their three regular season district games.

This is the third season in a row that GRC downed Paris 10-0 in the first round of the postseason, followed by a matchup with the Indians. The Cards won last season’s championship match 5-0 and the 2017 championship 5-1.

Matthew Abner is in his seventh season as the GRC’s head coach and is yet to lose to Montgomery County. He is 12-0 in games against the Indians, including 5-0 in the postseason. His teams have outscored Montgomery County by a total margin of 58-7 and 20-2 in the playoffs.

Win or lose, the Cardinals have guaranteed themselves a spot in the 10th Region Tournament next week. GRC has won three consecutive Region Championships but hasn’t been able to make any noise in the state tournament, losing in the first round each of the three years. The team has faced unlucky draws, with first-round matchups each season against the eventual state champion or runner-up.

Kickoff for the 39th District Championship is scheduled for 6:30 p.m. on Oct. 9 at the new Cardinal Stadium.