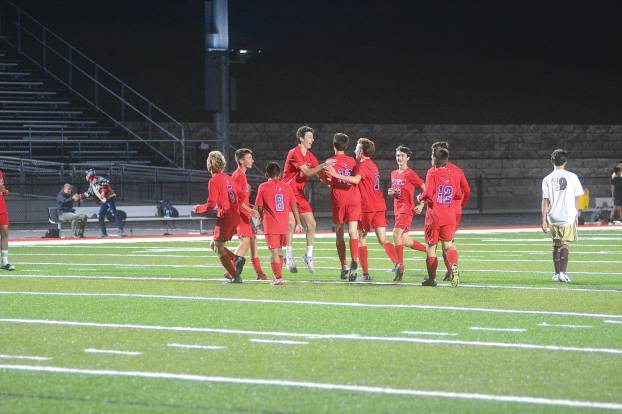 Conner Brown is met by his teammates to celebrate after he scored the final goal, advancing the Cardinals to the district championship. (Photo by Roman West)

George Rogers Clark’s boys soccer team finished the regular season with the 10th Region’s best record, 14-2-2. However, a district loss to Montgomery County bumped them to the second seed in the district tournament.

The Cardinals faced Bourbon County, the three seed, in Tuesday night’s opening round of postseason soccer. GRC beat the Colonels 6-0 in the regular season matchup on the road.

Following a Montgomery County mercy rule against Paris, the Cards took the field knowing who their opponent would be if they were to win their game, against one of the two teams they lost to in the regular season.

Skyler Hamon started the scoring for GRC, netting two goals in the first 10 minutes. The first after following a shot that bounced off the goalkeeper’s hands, the second from a beautiful pass from Brandon Beltran that gave Hamon a one-on-one with the keeper.

It looked as if the Colonels were going to get back in the game just minutes later with a penalty kick down only two goals, but Tayman Hayes saved the ball to hold onto his shutout.

Up 2-0, GRC kept the ball on the Bourbon County side of midfield for most of the remainder of the half. Nathan Sidwell took a corner kick for GRC that Hamon was able to get his head on, finishing his hat trick in the first half.

Another penalty kick, this time awarded to the Cardinals, saw Emidio Figueroa put in a goal to extend the Cards lead to 4-0 with 11 minutes to go in the half.

Beltran kept his streak of goals scored in games played alive, netting a goal after following his own miss. Beltran is up to 27 goals on the year and has scored in each game he’s played and finished.

Dylan Reffett scored the Cardinals’ final goal of the half nearly as soon as he checked into the game, courtesy of a Ryan Sosa assist.

Coming out of the break with a 6-0 lead, the Cardinals offense did not slow down.

The Cardinals threatened to put up a 10-goal mercy-rule shutout, but the Colonels got on the board as GRC was just one goal off.

Now needing two goals to end the game early with 16 minutes to play, GRC’s Beltran scored again to push the lead to 10-1 with nine minutes remaining.

Conner Brown ended the season for the Colonels, scoring a wonderful goal off a chip shot that flew in over the keeper’s head.

The 39th District Championship will be held at the new Cardinal Stadium Thursday, Oct. 10 at 6:30 p.m.

The Indians gave GRC their first loss of the season on Aug. 29. The game, at Montgomery County, went into double overtime and saw the Indians come out with a 3-2 victory.

The three goals allowed for the Cardinals tied the most they would allow in a game the entire season.

Last season, the two teams met in the 39th District Championship as well, with Montgomery County coming away with a 2-0 win.

The Cardinals are looking for their first district title since 2007 when GRC downed Montgomery County 2-1 in double overtime. That season, GRC made the state championship game before falling to St. Xavier.