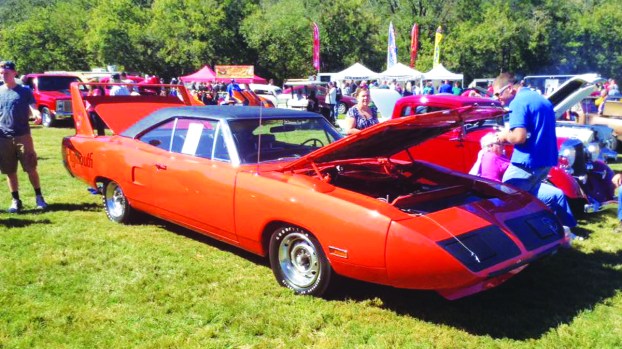 Car lovers examine a 1970 Plymouth Superbird during a previous Boonesborough Boogie Nationals show at Fort Boonesborough State Park. The event returns for its 24th year on Friday and continues through the weekend. Organizers said between 700 and 1,200 cars usually attend. (Photo by Fred Petke)

For nearly a quarter-century, the Southern Knights Car Club of Central Kentucky, based in Georgetown, has staged the event as a fundraiser for local charities.

The event started with a partnership with Cardinal Hill Rehabilitation Hospital, club president Chuck Tingle said. When the hospital ended its involvement after a couple years, the club continued the event in early October.

“We try to have a good time,” Tingle said.

Cars, trucks and all manner of vehicles typically fill the field between the campground and the swimming pool at the park. There are also several vendors on hand with parts, die cast cars, T-shirts  and other memorabilia related to classic cars.

The show is open to anyone and any type of vehicle, Tingle said.

“We have tractors, over-the-road tractors, pickup trucks, cars, Model As up to modern Camaros and Corvettes,” he said.

Depending on the weather and other events, the event usually attracts 700 to 1,200 cars on display and more than 5,000 spectators, he said.

Most of the cars are from Kentucky and surrounding states, though some have made the long haul to the park.

“We’ve gotten them all the way from Canada, New York and Alabama … anywhere east of the Mississippi River,” Tingle said.

The proceeds, from vehicle registration and spectator admission, all go to charities approved by the club.

“Most of the money goes to the Dream Factory and Toys for Tots,” he said. “Local Boy Scouts do the parking for us. We’ve probably given out … over $250,000 in donations. It’s a good cause because the kids we try to help.”

Registration for $20 per vehicle, but pre-registration is not required. Admission is $2 a person or $5 per carload for spectators.

Events begin at noon Friday and continue through Sunday afternoon.