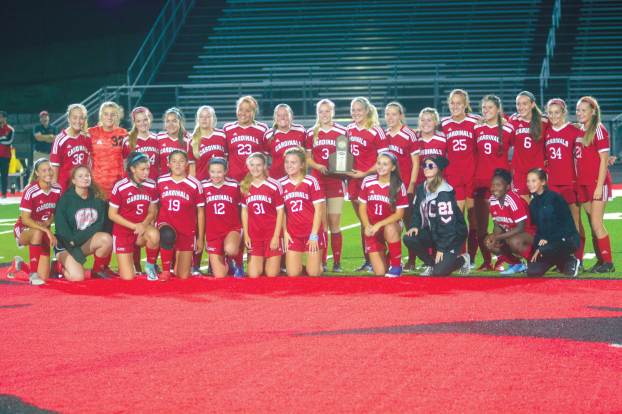 Seniors Delaney Manning (3) and Caitlin Bowling (15) hoist the district championship trophy as the rest of the team surrounds them. (Photo by Roman West)

Following a 10-0 victory against Paris in the first round of the district tournament, George Rogers Clark took on Montgomery County for the 39th District Championship at Cardinal Stadium on Wednesday.

The Lady Cardinals beat the Lady Indians 5-1 in the regular season. It was the only district game the Cards allowed a goal this year.

The match began with GRC getting the ball and possessing it for most of the first half.

Both teams were battling to get on the scoreboard first when GRC’s Delaney Manning took a corner kick 10 minutes into the game. Looking to set up a teammate in the box for a goal, the ball drifted to the upper corner of the back post and went in, giving the Cards a lead they wouldn’t relinquish for the rest of the game.

Neither team was able to get the ball in the net for the remainder of the half and the teams headed to the break with GRC leading 1-0.

Montgomery County’s halftime adjustments worked for them as they got much better looks in the second half, but the Lady Cardinals wouldn’t let them find the back of the net.

A penalty kick sent Manning to the box for another opportunity to score and to extend GRC’s lead. She put it in the top left corner of the goal, just outside of the keeper’s reach, and put the Cards up 2-0 with 23 minutes to play.

Things were getting chippy and both teams had a player given a yellow card in the final 20 minutes of the half.

With nine minutes to play, Manning was called on again, this time to take a free kick from 30 yards out. Once again, she was able to get the ball past the keeper, picking up her sixth hat trick of the season and her 36th goal of the year. The goal moved her into the top 15 in the state in goals scored this season.

A handball in the box gave Montgomery County an opportunity to stay in the game with six minutes to play, and they were able to convert, cutting the lead to 3-1.

With time winding down, the Lady Indians were in an all-out attack. A good look with a minute to play looked as if they were still in it, but Carrie Stevens made a spectacular save for GRC to preserve their 3-1 lead as the clock hit zero.

This was the fourth consecutive district championship for the Lady Cardinals and the sixth in seven years for head coach Matthew Abner.

“It’s a good feeling to see this team win,” Abner said. “They’ve worked so hard and they really deserved this trophy.”

The team is now set to play in the 10th Region Tournament, another event that GRC has won three consecutive years.

Abner said he likes where his team is at this point in the season.

“This is the first time we’ve been healthy all year and had all the starters out in the game at the same time,” Abner said. “It actually becomes a challenge of who’s gonna start today and when can I get the others in.”