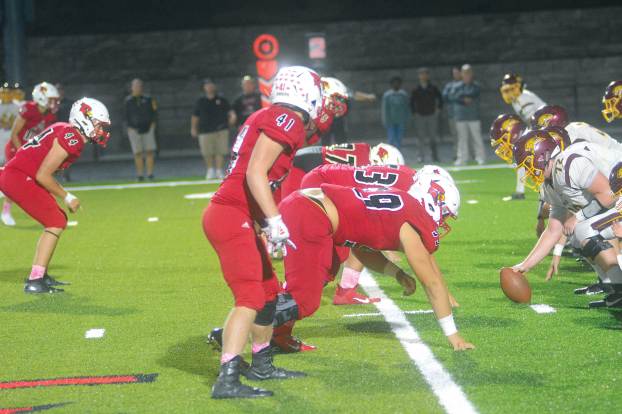 Jaylynn Johnson (41) lines up at outside linebacker ready to bring pressure against Cooper. (Photo by Roman West)

George Rogers Clark (2-4) football is set to hit the road tonight in their first game away from home since their 42-22 beatdown of Montgomery County on Sept. 13. The Cardinals will take on Bryan Station (2-4) in the first game of 8th District play for either team. The Cards will finish district play over the next two weeks as they take on the remaining two opponents, Madison Central and Oldham County.

The matchup is the first time Clark County has met Bryan Station since 2012, a blowout victory for the Defenders. The last Cards victory came in 2010, a 46-18 win.

The 40th matchup between the two teams will see Bryan Station with a slight edge over George Rogers Clark as they lead the all-time series heading into the game 20-18-1.

GRC’s head coach Oliver Lucas was a once the head man at Bryan Station, credited for rebuilding and revitalizing the program before he stepped down in 2009. Lucas spent four seasons as head coach of the Defenders, finishing with a 21-23 record, increasing the team’s win total each season he was there. In his second game as Bryan Station coach, he lost to George Rogers Clark 31-0.

Station has two running back with over 200 yards on the season and have accounted for eight touchdowns.

It will be up to the front seven of the Cardinals to contain the ground game of the Defenders.

Look for Aquevion Lewis to try to disrupt the backfield. Lewis has led the Cardinals in tackles through the team’s first five games, racking up 49 total and two tackles for loss.

Jaylynn Johnson was the second-leading tackler heading into last week’s game against Cooper, picking up 29 total tackles, including 22 solo and three tackles for loss.

Azariah Israel will need to have a big game to get the Cards’ offense moving as he has accounted for 13 of the team’s 18 touchdowns this season.

With the district wide open, a win would provide the Cards a lot of momentum heading into the second half of the season. No teams in the district have played each other, and GRC sits one game back of Oldham County’s 3-3 record.

Curreri makes cut for second round, shoots a 170