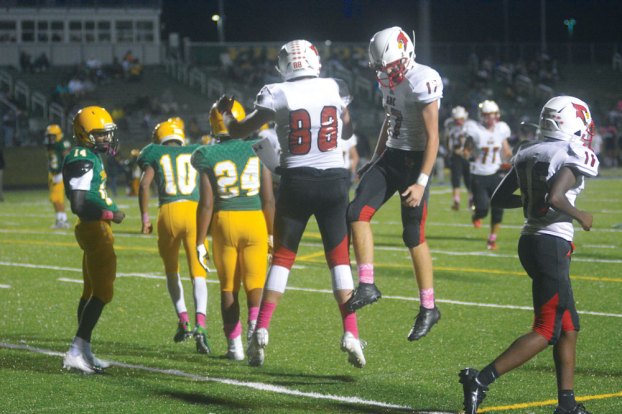 Dylan Gibson (88) celebrates with Isaac Graham (17) after they connected in the fourth quarter for a 21-yard touchdown pass. (Photo by Roman West)

George Rogers Clark traveled to Lexington Friday night to take on the Bryan Station Defenders on their homecoming night.

The Cardinals received the opening kickoff and methodically drove the ball downfield. Their offensive bread and butter all season has been star running back Azariah Israel and he picked up right where he left off. The driving force for the Cardinals offense finished the drive off with a six-yard run three minutes into the game.

GRC’s defense came out hot as well, as Jaylynn Johnson forced a fumble that Colby Ritchie recovered to give the Cardinals the ball back almost immediately.

The ground game was good to the Cardinals on the next possession as well as Israel once again capped off the drive with a touchdown run to extend the Cards lead to 14-0 six minutes into the game.

The Defenders’ offense put points on the board their next possession on an option play with three minutes to play.

GRC wasn’t able to put any more points on the board for the rest of the first quarter, but Israel put a 14-yard run into the end zone the first play of the second quarter.

Israel’s night wasn’t done there; on the next Cardinal possession he was able to score again, a 10-yard rushing touchdown.

The Cards’ defense stepped up again, forcing a punt on the ensuing Defender possession, but a fumble on the first offensive play for GRC gave the ball back to Bryan Station in the red zone. They were able to capitalize on the field position and cut the Cardinals’ lead to 28-13.

With four minutes remaining in the half, Israel scored his fifth rushing touchdown of the night to put the Cards up 35-13.

Clark County’s defense stepped up again and got the ball back for the Cardinal offense after forcing a turnover on downs at midfield. With Israel on the sideline, the Cards’ offense moved the ball through the air. Quarterback Jordan Manley found Dawson Gay for a touchdown with 31 seconds left in the half to push the lead to 42-13.

But before Bryan Station’s king and queen were announced, a good kickoff return allowed them to find pay dirt on a two-yard run to send the teams into the locker room with GRC leading 42-19.

To begin the second half, the Defenders turned the ball over on downs in the red zone to give the Cards the ball back. However they weren’t able to do anything, forcing a punt. The punt was blocked and Bryan Station had the ball with prime field position again.

The first play of the defensive possession, the Cardinals were able to force a fumble and Tye Boyken gave the ball back to GRC’s offense.

The offense moved the ball down the field and capped off the possession with a 34-yard Manley-to-Isaac Graham touchdown pass to push the lead to 49-19.

After his touchdown reception, Graham began the fourth quarter at quarterback. He led the Cards’ offense down the field and threw a touchdown pass of his own to Dylan Gibson to push the lead to 56-19, beginning the running clock.

GRC was able to get the ball back and bleed out the clock, beginning district play 1-0 and ending their three-game losing streak.

“It’s always a great feeling because only 50 percent can be winners, I’m just glad we’re on the right side this time,” head coach Oliver Lucas said. “I’m excited for the kids, excited for the community. We’re back where we should be but we’ve still got a long way to go.”

They’re back at home next Friday as they take on Madison Central for senior night at 7:30 p.m. at Cardinal Stadium.

The top two seeds from the 39th District squared off Thursday night in the district championship match. The Indians were... read more