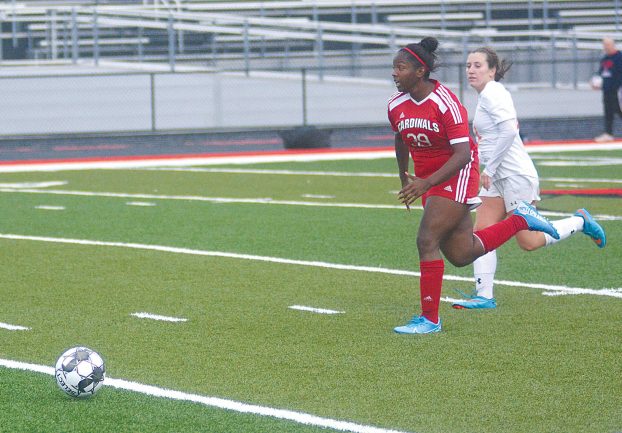 Sophomore Nicole Davis scored three goals in the first round of the 2019 postseason against Paris on Monday, the first hat trick of her career. Davis has scored five of her seven goals this season in the team’s last five games. (Photo by Roman West)

ATHLETE OF THE WEEK: Nicole Davis

Nicole Davis is a sophomore forward for GRC’s girls soccer team. Davis has scored seven goals on the season and added three assists. She picked up her first hat trick of her career in the team’s first-round game in the district tournament against Paris on Monday.

Q: Do you have any athletes you try to model your game after? D: I look up to some of the women on the United State National Team, I admire their hard work.

Q: Who has had the most influence on your soccer career? D: All the coaches that have helped to make me into the soccer player that I am today. As well as my mother who always pushes me.

Q: Did you set any team goals before the season? D: To go further than we did last year and to hopefully win a state championship

The top two seeds from the 39th District squared off Thursday night in the district championship match. The Indians were... read more