Nailed It or Failed It: Barbecue ribs 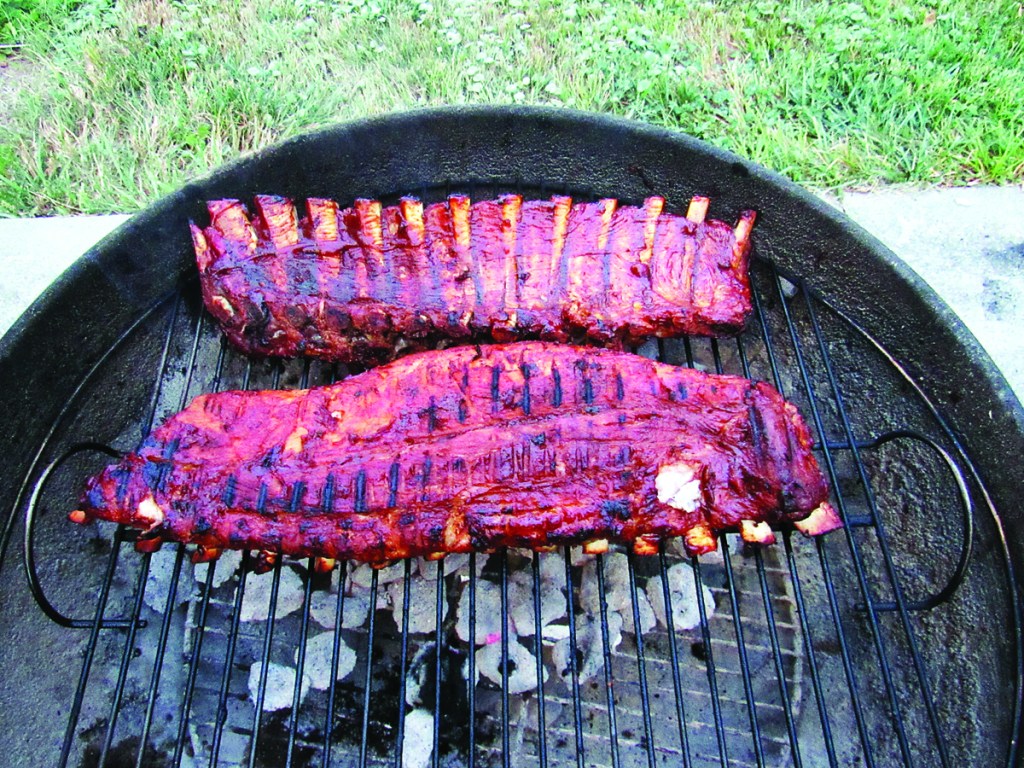 I was trying to come up with something different for supper when I found this recipe in my stash. I’d torn the recipe from an issue of Food Network Magazine.

I’m not typically a rib eater because I don’t like fatty meat, but we purchased ribs in anticipation of Brad using his electric smoker and they were in the freezer.

I decided we’d try them prepared this way instead.

— Vegetable oil, for the grill

Make the barbecue sauce: Bring the cola to a boil in a medium saucepan over high heat. Cook until reduced by about half, about five minutes. Add the ketchup, vinegar, brown sugar, mustard, garlic, Worcestershire sauce, cayenne and two teaspoons paprika. Bring to a simmer and cook, stirring occasionally, until thickened eight to 10 minutes. Remove from the heat and let cool slightly.

Preheat a grill to medium and prepare for indirect grilling. On a charcoal grill, bank the coals to one side; on a gas grill, turn off half the burners.

Remove one cup of the barbecue sauce to a small bowl, brush over the ribs.

Wrap each rack of ribs separately in foil.

Put the racks, overlapping if necessary, on the cooler side of the grill (indirect heat).

Cover and cook, flipping the ribs after 30 minutes until just tender and beginning to pull away from the bones, about one hour to one hour 15 minutes. (If using charcoal, add new briquettes every 30 minutes to maintain the heat.)

Remove the ribs from the grill and carefully unwrap; pour any juices into the pan with the remaining barbecue sauce. Bring the sauce to a simmer over medium heat and cook until thickened, five to seven minutes.

Increase the grill heat to medium high and oil the grill grates. Brush the ribs with some sauce from the pan and grill over direct heat, flipping every five minutes, until glossy and crisp at the edges, about 20 minutes.

Transfer the ribs to a large cutting board and let rest five minutes.

Cut the ribs between the bones and serve with the remaining barbecue sauce.

I decided to thaw a couple racks of ribs (about 5 pounds) and cut the recipe in half.

I put all the ingredients on the counter and realized we didn’t have any Dijon mustard; Brad had used the last drop the day before on a ham sandwich.

I let out a sigh and a “Shoot!” I told Brad I didn’t have all the ingredients. I started debating if I should head to town to get the one thing I didn’t have or just figure out another way to cook the ribs.

I grabbed my purse and headed to town.

Since we live out in the country, if I don’t have an ingredient, I don’t just drop everything and go to the store because it takes way too much time. I was cutting this recipe in half so I only needed a little more than two tablespoons of this mustard, but I really wanted to prepare these ribs.

Instead of going all the way to town, I stopped at a place on our end of town and hoped they would have a mustard I could use in this recipe. Thankfully they did.

I took one to the check out and I was on my way home within just a few minutes.

I poured the cola into a pan and let it reduce then added the other ingredients.

While the sauce was simmering, I went outside and started our charcoal grill. I heaped up the charcoal and lit it.

When I got back in the house, Brad asked what he could do to help. I said he could remove the membranes from the back side of the ribs. He found his extra-sharp filleting knife and got to work. It didn’t take him long to get the knife up under the membrane and loosen it, then he just pulled the membrane from the ribs.

I pulled out two pretty big pieces of foil and laid the ribs on their individual pieces, then I mixed the salt, pepper and paprika together. I sprinkled and rubbed each rack with the mixture making sure I got some on both sides of the ribs.

I folded the foil over the ribs and they were ready to go on the grill.

I checked the coals and they were a bit too hot to get started so I waited five more minutes. Even though they were still pretty hot, went ahead and put the ribs on the unheated side of the grill and put the lid on. After 30 minutes I went out and turned the ribs over. To my disappointment the bones poked through one of the packets and juice started running out.

I enlisted Brad’s help and we added more charcoal to the fire then put the lid back on the grill and waited.

In the meantime, the sauce had reduced so I put it on the stove with the heat off.

When the ribs had been on the grill about an hour, Brad and I decided they probably should cook a little longer; we let them go about 20 more minutes.

Brad held a rimmed baking pan while I removed the ribs from the grill. When we got inside, I told Brad I kind of hoped these things wouldn’t be over the top good, because they were so much trouble to prepare.

We took them inside and I coated them with some of the barbecue sauce then we headed back out to the grill to let them continue to cook over the direct heat. First, we spread out the coals, though.

Finally, we looked at each other and said, “That’s good enough.”

Once back in the house, I tented the ribs with foil while I finished getting our side dishes together.

Once everything was ready, I cut one rack of ribs apart. I was starting to cut the second rack apart when Brad suggested I leave them alone because we probably would not be able to eat both and they would probably reheat better the next night if they were whole.

We sat down, almost exhausted from the ordeal of cooking these things and Brad blessed the food.

We filled our plates and each picked up a rib. We sunk our teeth into them and to my disappointment, they were great.

Because we were picky when we purchased them and made sure they weren’t overly fat, we were really enjoying these ribs. Our fingers were sticky, our faces were sticky but we were enjoying them.

The fire was probably a little too hot because the ribs weren’t as tender as they probably could have been, but oh my goodness, they were good.

I can’t believe I’m saying that because like I said earlier, I’m not a rib eater. They were so good I think we could have eaten two racks during that meal, but I’m glad we didn’t and we had them again the next night.

Brad wrapped them in foil and added a little apple juice when he reheated them in the oven.

They were just as good the second time around as they were the first.

Next time I’ll just have to start a lot earlier, and fix the whole recipe, not just half.

I’ll be on the lookout for more meaty ribs at the grocery.