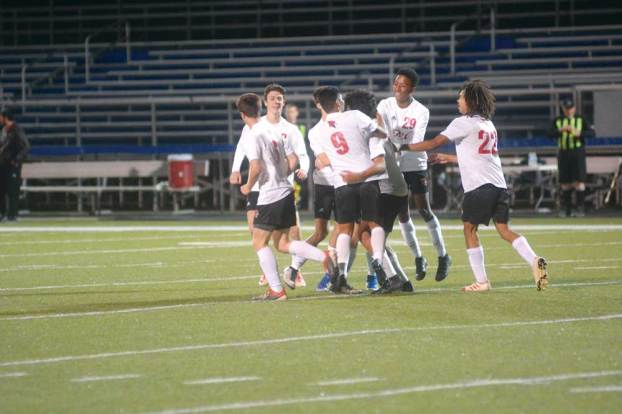 Ryan Sosa’s teammates surround him in celebration after he got the scoring started in the 10th Region Tournament for the Cardinals. (Photo by Roman West)

After finishing as the district runners-up, George Roger Clark’s boys soccer team hit the pitch again Monday night in the first round of the 10th Region Tournament.

The first-round matchup came against the Harrison County Thorobreds, a rematch of a one of GRC’s two draws in the regular season.

Clark County got off to a hot start as Ryan Sosa nailed a long range shot to give the Cards the lead six minutes into the match.

After the goal, the Cardinals didn’t give up. They owned the possession for most of the first half and continued to get good shots. Another one finally fell as Skyler Hamon continued his hot streak, putting a goal past the keeper and extending the GRC lead to 2-0 with 22 minutes to play in the first half.

GRC’s Brandon Beltran was held scoreless in the district championship game last week for the first time all season, but he found the back of the net against the Thorobreds to give the Cards their final goal of the half, and the game, and giving them a 3-0 win.

“We were a lot more disciplined defensively tonight. Anytime you can keep a clean sheet pretty much – the defense really stepped up,” head coach Nicholas Vogler. “I told my guys to go out from the beginning, bring an intensity they can’t match and put goals in early so we can play a disciplined defensive game.”

GRC will play win-or-go-home games for the rest of their season and the next contest in line is Calvary Christian on Wednesday at 8 p.m. at Montgomery County. The Cougars scored the most goals of any team in the 10th Region this season.

“We haven’t played them this year but I’ve been talking to people who have watched them and played against them this year,” Vogler said. “I know that they’re formidable offensively. They’ve got a couple of really good attacking, senior players so it’ll be another one of those games where we have to be on our toes defensively and take our oppourtunities when they come.”

George Rogers Clark traveled to Lexington Friday night to take on the Bryan Station Defenders on their homecoming night. The... read more