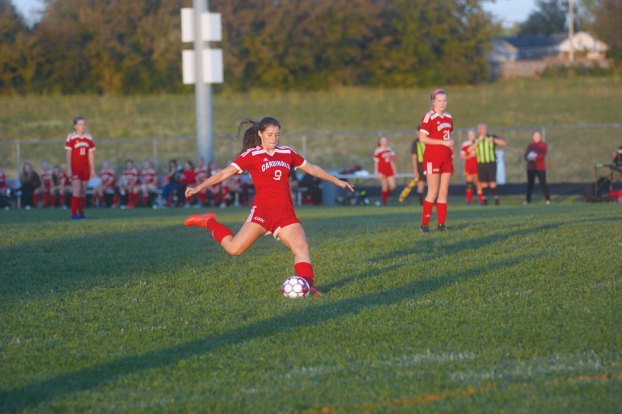 Caitlin Fike picked up a hat trick in GRC’s first round matchup against St. Patrick on Tuesday. (Photo by Roman West)

With 99 career victories heading into the match, and a win-or-go-home game, Cardinals’ head coach Matthew Abner knew how big of a game this was.

Allie Bush was able to start the scoring off for the Cardinals early, picking up the game’s first goal three minutes into the match.

Next on the scoreboard was Leslie Hernandez three minutes later. Then, Bush scored on a Hernandez assist to put the Lady Cardinals up 3-0.

Caitlin Fike, who played forward for the Cardinals most of last night but usually plays defense, put in two goals in two minutes for the Cards. The first from a Shelby Vaughn assist, the second from a Nicole Davis assist.

Each of the girls who assisted Fike were then awarded with goals of their own. The next two minutes saw Davis and Vaughn each score, pushing the Cards’ lead to 7-0 where it would remain until the second half.

Julia Pohl came out in the second half with a statement header coming off a corner kick from Shelby Vaughn two minutes into the period.

Fike completed the hat trick six minutes into the second half after another Vaughn assist, and the final goal of the game was Ella Martin’s first goal of the season coming off an assist from Caitlin Bowling, giving the Cardinals a 10-0 mercy rule victory over the Saints.

“We were trying to possess. They’re a kickball team so we had to try to not fall into they way they play,” Abner said. “We reverted and just tried to kick the ball down to the forwards and we didn’t have much success when we did, but when we controlled it we had good success and good opportunities.”

The victory puts GRC in a matchup against Campbell County on Thursday at 6 p.m. at Harrison County. The two teams met in the regular season, a 2-2 draw at Campbell County. The Cards were without Hernandez, Bowling and Delaney Manning in the game, and with a neutral field, Abner will look for his 101st career win with a chance to advance to his fourth region championship game in seven years as head coach.

“Hopefully we’re more prepared this time. We played on grass all year long, we practice on grass. We’ll play on grass on Thursday. [Campbell County] plays and practices on turf, and they were at home.” Abner said of what he hopes is different about this matchup. “It’s going to be a battle, it always is with them.”