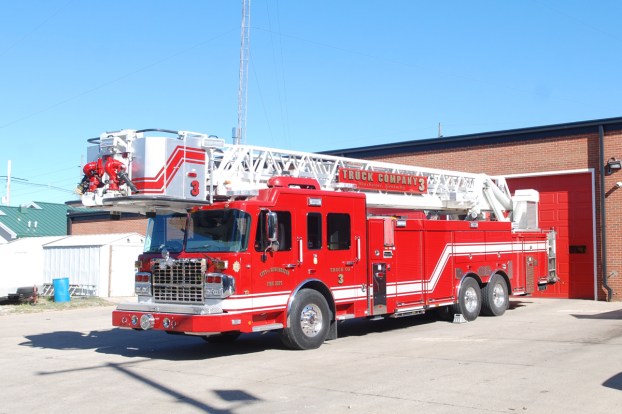 After Clark County’s two fire departments had to park trucks and reassign personnel this weekend, discussions continue about how to help the two agencies.

On Saturday, Clark County Fire Department browned out its Engine 2, for a lack of available personnel. Sunday, Winchester Fire-EMS parked its ladder truck, Truck 3, for the same reason. Both departments were fully staffed Monday.

Both agencies have been struggling to attract new employees and retain current ones, even to maintain minimum staffing.

Representatives with the Winchester Professional Firefighters Local 1807 met with the media Sunday to express their concerns and willingness to work with the city and county to fix the problem.

“We want to work alongside the city and county on these issues,” WPF member Ethan Brogli said. “We as the union want to come up with solutions.”

Winchester City Manager Matt Belcher said the city has been working on the situation for months.

“I’m extremely disappointed in our fire department, our chief and leadership and Mr. Brogli and any employee who believes this is not a priority,” Belcher said. “It has been a priority for the last six to nine months. We have discussed retention. We’ve discussed pay. We’ve discussed incentive packages. The chief has put forth programs for single-role paramedics to try to address the problem.”

The city has already voted to create new positions to help with the growing volume of EMS runs.

“The city commission voted last month to add six positions to the tune of $400,000,” Belcher said. “There are conversations with the county to address EMS and fire. Anyone who thinks myself and the city are not doing anything to address this is misinformed.”

Clark County Judge-Executive Chris Pace said the discussion is not new within the courthouse either.

“We’re been taking actions to get to full staffing,” Pace said. “We do have a few empty slots.”

There is a joint committee of city and county representatives meeting to work on the EMS situation, including the agreement between the city and county to fund EMS operations, but it is not addressing firefighting operations specifically.

The situation is one that has built over many years.

All sides acknowledge the situation is complex, and quick fixes have not been found. Interest in the profession seems to have reduced, and competition for paramedics from the private sector has grown as well.

Salaries are another issue, between neighboring departments and the private sector.

Clark County Fire Chief Ernie Barnes said the county’s fire department committee discussed staffing during its meeting Monday morning. No action was taken, but Barnes said there were several ideas offered. The committee will meet again Oct. 21 in hopes of making a recommendation for the Clark County Fiscal Court at a later date.

Sunday was the first time in decades, possibly since the strike in the 1970s, the city fire department parked a truck and reassigned personnel.

“We were afraid of this day… But it caught up to us,” Rigney said Sunday afternoon. “We’ve opened it up to our part-time and full-time personnel. We’ll do everything in our power to keep it up and running.”

Barnes said his department parked Engine 2 on Saturday, again for a lack of available staff. He said the department has been struggling to hire new firefighters, and several are off work indefinitely for injuries.

Barnes said his department’s volunteers have been able to cover some gaps, but they are limited on the number of hours they can work. The pool of applications has shrunk as well.

“Hopefully we can find enough ways to get some people in here,” Barnes said.

“There is an extreme amount of competition for paramedics in the private sector which drives up the price,” Pace said, adding that many firefighters are paramedics as well. “It’s not a Winchester problem. It’s not even a Kentucky problem.”

In September, Rigney presented a temporary plan to the city commission which included the possibility of browning out apparatus if minimum staff is not available to work. The plan also eliminated mandatory overtime.

Barnes said his department has relied on mandatory overtime as well, but there are problems with that approach.

“We’ve been working a lot of overtime and a lot of mandatory overtime,” he said. “There comes a point if you keep working your people all the time, they’ll start quitting.”

Brogli, a city firefighter, said some firefighters have been working up to five days straight. Normally, firefighters work 24 hours at the station and have 48 hours off.

“We’re working ourselves up to 120 hours at a time just to staff apparatus,” Brogli said.

“You can only work a 120-hour week so much,” WPF President Jonathan Beam said.

Hendrick stood at the edge of a deck Saturday afternoon, trying to decide what to do. He saw one of... read more