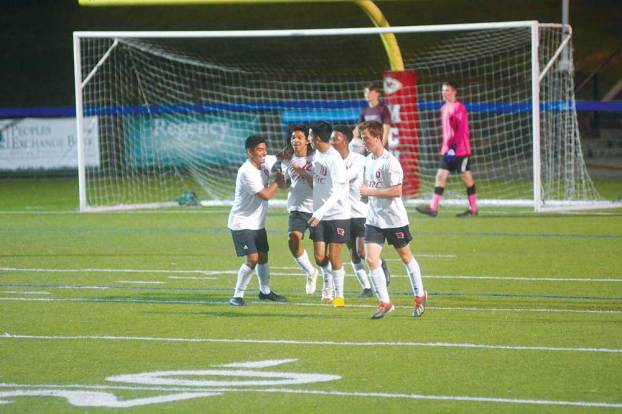 From left: Brandon Beltran, Skyler Hamon, Emidio Figueroa, Tyree Brown and Nathan Sidwell all hug Hamon after he scored a goal to put the Cardinals up 2-0. (Photo by Roman West)

Following a big win against Harrison County in the first round of the region tournament, George Rogers Clark is set to take on the 10th Region’s top offense throughout the regular season, Calvary Christian.

The Clark County Cardinals finished the regular season with the region’s best record, but Calvary Christian was only one spot behind them, sitting at 14-4-1.

The Cougars scored 99 goals in their 19 contests, an average of 5.2 per game.

GRC’s defense was the top in the region, allowing only 21 goals to this point.

KHSAA’s RPI, or Ratings Percentage Index, favor the Cardinals as GRC’s is .623, the highest score in the region, compared to the Cougars’ .552, the fourth highest in the region. RPI is a statistical mean to measure a team’s strength relative to other teams, based largely on the strength of their schedules.

The Cougars have four players who have all scored at least 15 goals on the season. Their leading scorer, Alec Lockard, has put 29 goals in the net this year, one more than GRC leading scorer Brandon Beltran.

GRC will look to continue their hot streak as they have won eight of their last nine games.

Reaching the 10th Region Semifinals is already the best finish for the boys’ team since 2014 when they fell in the same round to Scott High School. A trip to the Region Championship game would give first-year head coach Nicholas Vogler the furthest postseason run since the school made the State Championship game in 2007.

The game is scheduled to kick off at 8 p.m. on Wednesday, Oct. 16 at Montgomery County High School.