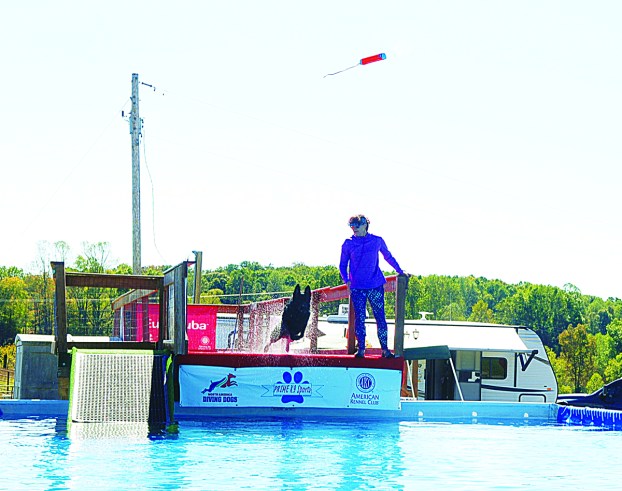 Chaos launches himself from the dock as he chases his toy Saturday. Dogs were competing for distance in their jumps into a pool. (Photo by Fred Petke)

Hendrick stood at the edge of a deck Saturday afternoon, trying to decide what to do.

He saw one of his toys floating in the pool below. He paced from side to side, looking at his toy.

“Go get it,” said Emily Smith, his owner.

He tried to get to the gate to the ramp into the pool, but it was latched.

He paced some more. He lay down with his paws and face hanging over the edge.

Do I want to jump? I want my toy. It’s a long way away. I don’t know about this.

He stood up, took a couple nervous steps and jumped. Splashdown. He paddled out to his toy, then over to the ramp out of the pool, toy in his mouth.

Hendrick, who has only been diving for two weeks, was one of 25 dogs competing Saturday in the North America Diving Dogs competition hosted by Prime K9 Training in Trapp.

Smith, Prime K9’s owner, said this was the fourth event at her facility, the first of which was last year.

“If your dog has a toy and likes to swim, it’s a great sport,” she said.

In the dock diving competition, a person stands at the end of the dock to throw a floating toy into the pool. The dog then takes off at a run to launch off the end and get their toy.

Each dog has four splashes, or two jumps each, to set their own longest jump from the end of the dock. A judge marks the distance from the dock to the point where the dock of the dog’s tail enters the water, she said.

There is also an air retrieve competition, where dogs try to grab a bumper suspended over the pool. The bumper is then moved back one foot after each successful grab.

The competition is open to any dog. There are two placement classes, open and lap, based on the dog’s height. There are also five distance divisions, from novice to elite.

The national record, though belongs to a whippet, she said, though she has seen bulldogs compete as well.

Students to perform, compete with ‘Digging Up the Boys’