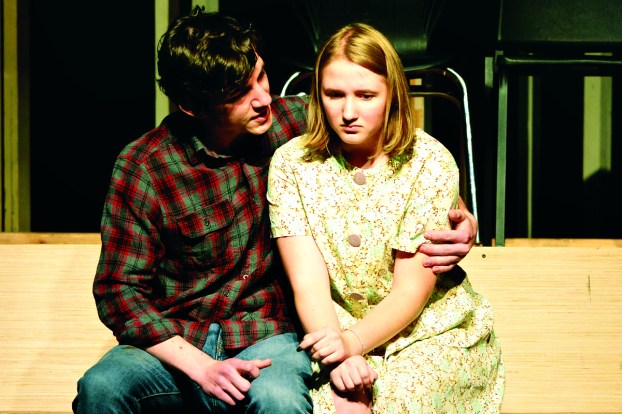 The foreman (Galen Arnett) tries to comfort Addie (Charli O'Dell) during a scene in "Digging Up the Boys."

Students to perform, compete with ‘Digging Up the Boys’

GRC will debut “Digging Up the Boys” at 6:30 p.m. Thursday at the GRC Cardinal Theater.

“The play is only 45 minutes with no intermission, but is an intense and emotional journey that will make the audience consider what they would do in a time of tragedy,” director Katherine Lowther said.

Tickets are $10 for adults and $5 for students. Tickets are available at grcmusic.ludus.com or at the door.

“I would rate the play at PG, because of the difficult themes and a frightening scene,” Lowther said.

“Digging Up the Boys” is a play by Laura Lundgren Smith about three men working an old mine to keep food on their families’ tables in a poverty-stricken community.

“We chose this play because it spoke to me personally, having heard stories about mining from my father-in-law, and reading about the Blackjewel miners’ protest — just recently ended — over not being paid for their dangerous and difficult work after the company closed the mine,” Lowther said. “One of our actors has family members who have perished in mining accidents in Harlan County, making the play much more poignant and real to her.”

When disaster strikes, their womenfolk above are left with no answers from the company foreman, who has his own dark agenda, according to the play’s description. Those below and those above must deal with the emotions that rise as they realize time is running out, hoping desperately for a miracle that will change all of their fates, before it’s too late, Lowther said.

Charli O’Dell, a senior at George Rogers Clark High School who plays Addie in “Digging Up the Boys,” said her character is a 16-year-old girl who has been taking care of her dad since her mom died. Her dad has black lung because of all of his years working in the coal mines.

“What I like about Addie is that she’s vulnerable,” O’Dell said. “And that’s part of an emotion that I don’t get to tap into a lot. It was difficult for me to (bring to life) that vulnerability, especially in the beginning part of the show, and I like how she changes throughout the show.”

O’Dell said the show was difficult to put together.

“We had over a week-long audition process,” O’Dell said. “We auditioned, and then we had about a week and a half of auditions and callbacks to finally get to the cast list we have now. We’ve been rehearsing for not very long. And so it’s been very challenging on all of us, but in the best way, because this is the advanced drama program. And so we need to be pushed to that limit.”

There will also be an artist reception and gallery with Appalachian artist and former Harlan County coal miner Bob Howard starting at 5:30 p.m. in the GRC theater foyer. Howard painted the main backdrop for the play, creating an original, large-scale artwork that will be creatively displayed during the show.

The students will take this piece to their first ever theatre competition, Kentucky Thespians Festival, Oct. 18-19 in Owensboro.

“This is GRC’s first time ever going to a drama competition,” O’Dell said.

Students will compete against 11 other schools and will also compete in individual events for monologues and musical theater songs, tech challenges (quick change costumes, hanging and focusing theater lights, etc.) and for college scholarships and acceptance into prestigious theater programs.

Students will follow up with a performance at the regional competition for the Kentucky Theatre Association Nov. 2 at Frederick Douglass High School in Lexington.

“This is the best time for me,” O’Dell said. “I’m so excited to be not only leaving my high school career doing this, but being the first person to lead a group into it because I’m also the president of International Thespian Society. So I’m leading this cast into our first competition. And it’s the best feeling in the entire world. I couldn’t ask for a better senior year.”

Lowther said between the two competitions, students will travel to Harlan County to tour the Kentucky Coal Museum, perform at Harlan County High School and go into Portal 31 mine. Howard will travel with the students throughout the day and is also arranging for the students to meet with an active coal miner to give a first-hand perspective about Appalachian mining life, Lowther said.

Lowther said the themes of “Digging Up the Boys” are still relevant, and she hopes everyone involved in the play or who comes out to see it can learn a little more about Kentucky culture and history.

“The themes, language and problems brought forth in the play, set in the early 1950s, are still accurate and relevant today,” she said. “So I wanted to provide students the opportunity to learn about a part of Kentucky culture and history that is not often featured in the classroom, while also teaching them the lessons of empathy, loss and sacrifice that ‘Digging Up the Boys’ provides.”

O’Dell said people who come to see the show Thursday will notice the cast’s strong chemistry.

“We have an amazing cast, and we’re all best friends,” O’Dell said. “And we love each other so much, and I think that’s an amazing thing to show to people.”

For the second time in as many days, a fire truck in Clark County has been parked because there weren’t... read more