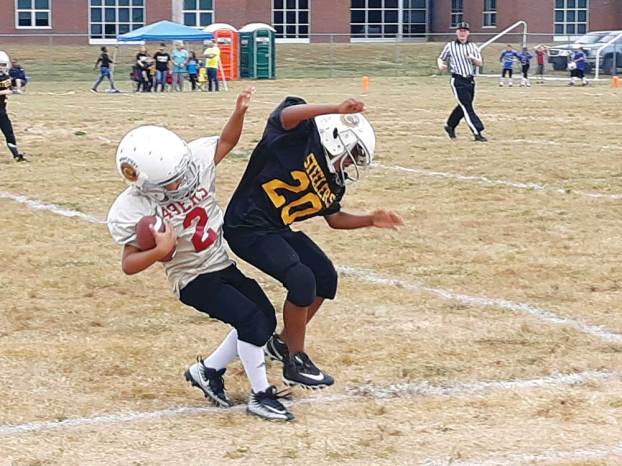 A Steelers’ player and a 49ers’ player collide in their matchup on Oct. 6 which saw the 49ers come away with a 16-0 win. (Photo Submitted)

Sunday’s game saw the 49ers vs. the Steelers, the Cowboys vs. the Raiders and the Redskins vs. the Packers.

The Cowboys beat the Raiders 24-6. Leland Durham and Travis Renner of the Cowboys each scored one touchdown and JaMylyn Johnson scored two.

Tuesday’s games saw the Bengals vs. the Steelers and the Packers take on the Raiders.

The Bengals’ Cade Fithen scored a touchdown and Lake Cruse converted the two-point attempt as they fell to the Steelers 14-8.

In the Packers vs. Raiders matchup, Haskins and Tankersley picked up where they left off on Sunday, scoring a touchdown each in their 12-0 victory.

After a dominating 10-0 victory in the first round of the 10th Region Tournament, George Rogers Clark’s girls soccer team... read more