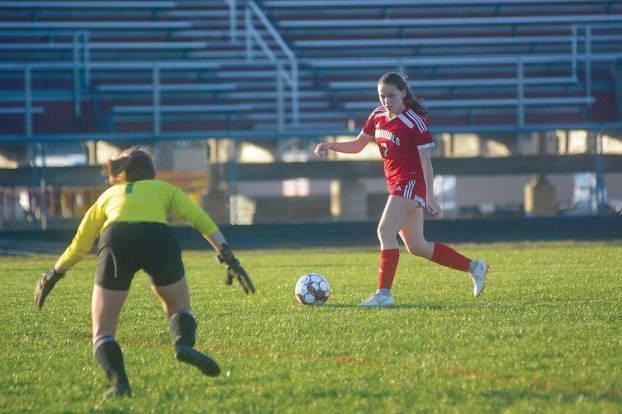 Allie Bush sizes up St. Patrick’s keeper before scoring her second goal of the night in the first round of the 10th Region Tournament. (Photo by Roman West)

After a dominating 10-0 victory in the first round of the 10th Region Tournament, George Rogers Clark’s girls soccer team is set for a matchup against the best scoring defense in the region.

Thursday night’s matchup with the Campbell County Camels will determine which team plays for a shot at the state tournament, where George Rogers Clark has competed each of the past three seasons.

The Camels have only allowed 20 goals through their 22 games. They rank 15th in the state in total goals allowed and are 11th in goals allowed per game.

But the Lady Cardinals have the highest-scoring offense in the region to counter. Scoring 132 goals in their 24 games, GRC has scored the third-most goals in the state and sits at 10th in the state in goals per game.

The high powered offense is led by senior Delaney Manning. Manning has found the back of the net 36 times this season, putting her 20th in the state and leading the region in goals.

Another cog in GRC’s offense is junior Shelby Vaughn, who has 18 assists on the season, good enough for 23rd in the state.

The two teams met in the regular season, a 2-2 draw on Sept. 23 at Campbell County, a turf field where the Camels played and practiced on all season long. The postseason game will be played on grass at Harrison County, the surface the Lady Cards have seen most of their games and practices on this season.

The two teams met in the semifinals of last season’s 10th Region Tournament as well, with GRC escaping with a 1-0 victory in overtime. Allie Bush, who is second on the team in both scoring and assists this season, put in the game-winner in last year’s thriller.

The winner of the game will play for a chance to go to the state tournament in a matchup with the winner of Bishop Brossart vs. Harrison County.

GRC’s game against Campbell County is set to kick off at 6 p.m. Oct. 17 at Harrison County High School.