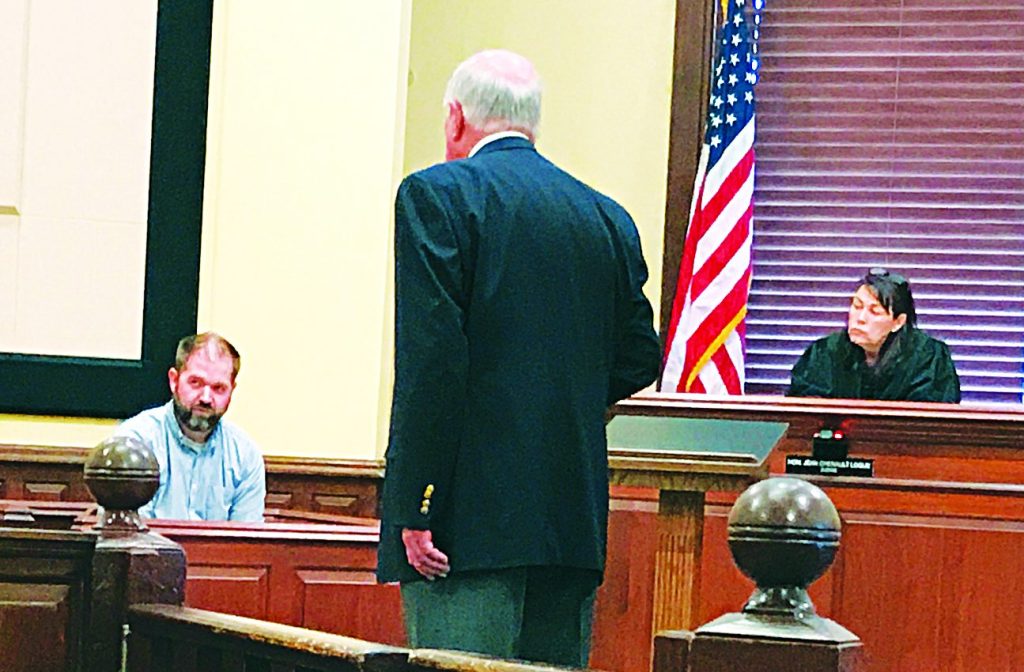 Winchester Planning Director Robert JEffries, center, testifies during a hearing Tuesday in Clark Circuit Court in a lawsuit between Stuff Recycling and the Board of Adjustments. (Photo by Fred Petke)

Attorneys for Stuff Recycling, the Clark County Board of Adjustments and a neighboring resident now have until the end of the month to file briefs about whether a January ruling against Stuff is enforceable.

Following a nearly three-hour hearing Monday in Clark Circuit Court, Judge Brandy Oliver Brown said she would begin considering the case Nov. 11, while allowing attorneys for the Board and property owner, Tresa Bridges, 14 days to file their briefs, and another 14 days for Stuff’s attorneys to respond.

Stuff Recycling, a metal and material recycling business on Lexington Road, filed the suit earlier this year, following a January ruling by the Board of Adjustments.

The Board voted unanimously Stuff could only use the property in front of its buildings for employee and customer parking. The vote expanded on a 2012 vote by the Board, which restricted all recycling activities to occur behind the buildings.

In 2012, the Board affirmed the recycling business as a legal non-conforming use within a B-4 zoned area, essentially grandfathering the business in. It also said the business could not expand beyond its current footprint and scope.

Attorneys for Stuff argue the Board has no authority over the company’s business, other than preventing it from expanding its non-conforming activities.

The business has been a frequent topic since a June 2018 fire started at the property and burned for three days. Three months later, a complaint was filed with the Board claiming Stuff had expanded its business beyond what was allowed in the 2012 meeting.

Part of the dispute involves an adjoining one-acre lot which Stuff purchased after the 2012 vote. Stuff’s attorneys said use of the lot conforms with the B-4 zoning as written, and the remaining nine acres of the Stuff site remain under the 2012 vote.