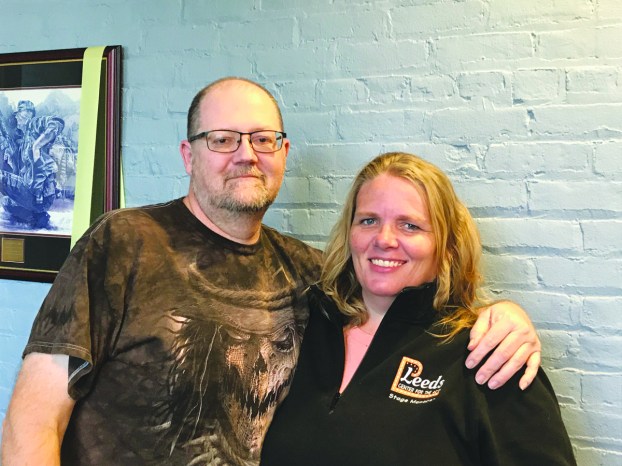 This weekend, the lower level of the College Park Gym will again be turned into a haunted house and haunted swamp for the annual fall festival.

For the last eight years, Thom and Roni Brown, their family and friends have been responsible for thousands and thousands of scares, screams and things that go bump in the night as they orchestrate the scary festivities.

The couple have lived in Winchester since 1994 and carried their love of Halloween through several homes, before starting at Winchester-Clark County Parks and Recreation.

Every year, Thom, who works as a copier repair man, and Roni, a third-grade teacher at Shearer Elementary, start largely from scratch and with a short timeframe to build a new set of scares.

“We don’t want to gross anyone out,” Thom said. “We want them to have a good scare.”

Winchester Sun: How long have you been doing haunted houses?

Thom Brown: In 2004, we got the opportunity to buy a house on Wabash Avenue.

We wanted to have a little housewarming party to thank everybody that helped us move. We decided to combine it and have a Halloween party.

It was on the night of trick-or-treating. The kids got back from trick-or-treating and they had nothing to do, so we threw together this quick little haunted house thing with the spaghetti and the grapes and stuff down in the basement. The kids really loved it.

I decided we would have a bigger one the following year. I put up black plastic everywhere. I had a bunch of really scary props and everything. We did that about six years.

The last year we did it at Wabash, we combined it and charged admission and the money went to Shearer (Elementary) because she started working there as a teacher assistant.

We sent out fliers and we had all these kids come through our basement.

The next year, we actually went to Shearer itself and did a haunted hallway.

We did that for four years, and did one for a Christian school here.

We were actually in charge of the softball league up at Community Park. The guy who had it before us… said you ought to talk to Parks and Rec. This was 2012.

They had done the haunted swamp the year before. He said they wanted some help doing it this year. They said, ‘Absolutely. We’d love the help.’

WS: Was Halloween as big a thing for you growing up?

Roni Brown: Yes. My grandmother and grandfather used to make up little candy bags for all the kids that came. I have always loved the idea of people getting to dress up and be something they are not, even for that one night.

When he said, ‘Let’s do a Halloween thing,’ our youngest daughter had just started theater and I said, ‘The more the merrier, but the money has to go to the theater program.’

When we came here, we said let’s see what we can do a little bigger and a little better each time.

It’s something I really look forward to every year as well.

WS: When did you realize you had a shared love of Halloween?

RB: I think it was when we were dating.

TB: We started dating. We both worked at Kmart on Richmond Road in Lexington. There’s some confusion as to who asked who out first, but eventually we decided to go out on Dec. 27, 1991.

I had asked a friend what a good movie to go see would be. “The Last Boy Scout” was out with Bruce Willis. He said, ‘No, she’s a good Christian girl. She won’t like the violence.’ She’s a big Bruce Willis fan.

We sat at dinner at Darryl’s for three or four hours just talking. We finally decided on a movie.

We drove around the back to South Park in my 1966 Mustang. We go and see “The Addams Family.”

TB: I remember going to work the next day and singing the theme song to the TV show all day long.

RB: And here we are 25 years later spooking people.

TB: That was our first clue.

WS: When do you start planning?

TB: It varies. We’re always looking for ideas. We try to start a month or a month and a half beforehand.

A lot of the props and backgrounds we use year after year. I especially like to make everything different.

I’m building stuff in my mind all the time. The problem is she can’t read my mind, so she’s never really sure what’s going on.

RB: We have less than five days. You should figure something out.

TB: We have a couple back area rooms we get (Monday) night. On Wednesday night, we’ll get two of the smaller weight rooms downstairs. On Thursday after 5 p.m., we will get the TRX room and the big fitness room. Friday night at 6, we have to be set. Not being able to get in there…

RB: It’s a hurdle. We have to build at home and then bring here.

TB: We were actually building a big prop last night.

RB: Parks and Rec doesn’t have a budget for this, it’s strictly volunteer. So we have to look at our budget. He’s a master at yard sales and thrift stores.

Pallets have saved us many a year, and he’s a master carpenter. We build things, but they you have to take them down. We usually build fresh every year.

WS: How many people does it take to pull off the haunted house?

A couple years ago, we had 36 and then we had to find places for them. … We don’t count ourselves in that. We used to scare. Now we are kind of the tour guides and I’m the one coaching people through. ‘It’s OK. It’s not that scary.’ We have a toned-down time where we’re not totally scaring you and then people are like, ‘Bring it on.’

WS: Where do you find your volunteers?

TB: Rick Baldwin and his youngest are helping us. They come from all corners of the community. We’ve had people who just call Parks and Rec and say ‘I want to volunteer.’ We’ve got a mother and her daughter. Last year they had to go through the Haunted House 15 times. She said, ‘I can’t wait until she’s old enough to help. I said, ‘She’s old enough now.’ We’ve had little bitty kids (help).

WS: What is the best part of doing the haunted houses?

RB: This is a terrible, terrible answer. I really like making people cry. Truth be told, I like to catch people off guard and really scare them.

We’ve had some people come out and say, ‘I’m not afraid of anything.’ Those are the ones I really look forward to scaring.

I had a teacher friend who was very afraid, so I volunteered to walk her through. Another teacher friend of ours scared her so badly she pushed me down and stepped on top of me to get away from him. It’s still one of my favorite stories ever.

The last time I actually participated in the haunted house, I had a group people. All I had to do was stand there. I wasn’t allowed to talk. They stood there probably for about 10 minutes. There was a line. They wouldn’t go through. I finally had to raise my head and speak. It scared them so bad they fell back on each other. That’s really my favorite part.

Selfishly, I like the appreciation and a job well done.

TB: It’s the same thing. I had one little boy. After we were done with the haunted house one year and taking stuff down, this little boy comes in and says, ‘Please don’t scare me. I’ve already peed my pants.’

RB: I enjoy the fact that Lexington has this great reputation for its wonderful haunted houses. You can go to other towns and spend way more money than you will here, but this is something our little town has. It’s safe. It’s confined. There’s an alternative upstairs, but they’re coming downstairs. They’re getting scared. They leave and they talk about what a great time they had. Then they tell their friends.

For the first time in about a decade, the Clark County Fair Board will host a fall demolition derby. The... read more