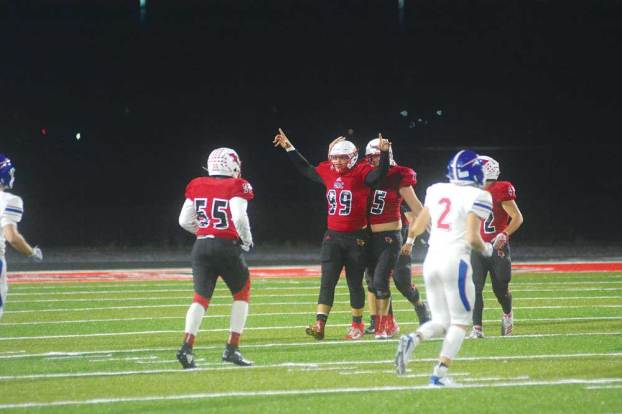 Trace Mitchell (99) celebrates after picking up one of his sacks against Madison Central. (Photo by Roman West)

George Rogers Clark’s young football team seems to have finally escaped their early-season growing pains and hit their stride at the right time. After a 37-point win against Bryan Station in the district opener, GRC kept the ball rolling with their second district win in as many weeks.

GRC began the game with the ball but quickly gave it up to the Indians at the Cardinals’ two-yard line. Madison Central turned it into points on the first play of their offensive possession on a quarterback sneak.

It got worse before it got better as the Cardinals turned it over again, an interception in the red zone. But the first play after getting the ball did not go as well for the Indians as it did on their first drive as they fumbled it and gave it right back to GRC inside the 10. Quarterback Jordan Manley found Dawson Gay on an eight-yard touchdown pass. Tye Boyken’s extra point was good giving GRC a 7-6 lead.

The Cards’ offense kept moving the ball through the air and Manley found Jerimiah Johnson for his second passing touchdown of the night.

The Cardinals recovered a fumble on the Indians’ next offensive drive.

Manley kept his day going, finding Gay again for a touchdown, a 52-yarder to push the Cardinals’ lead to 21-6.

Manley and Gay connected for a third touchdown before halftime thanks to Trace Mitchell recovering a fumble with four minutes to go in the half.

The Indians struck again before the teams went to the locker rooms, scoring on a 55-yard touchdown pass.

The beginning of the half woes hit GRC again to begin the second half, throwing a pick-six on their first drive.

They bounced back on their next possession as Azariah Israel scored on a 64-yard run to push the Cardinals lead to 35-20.

After trading punts, the Indians scored a touchdown as the third quarter came to an end, making it a one-score game at 35-27.

GRC was able to push it back to a two-possession game after Israel punched in an eight-yard run with nine minutes to play.

But Madison Central didn’t give up, marching down the field to find the end zone with five minutes to go.

GRC was moving down the field, looking to ice the game with time winding down when Madison Central was able to pop the ball free and recover the fumble, giving them a chance to tie the game.

Down eight, the Indians took over on their own 40 with three minutes to play. Clark County’s defense held strong, forcing a turnover on downs.

The Cardinals’ offense was able to kill the clock and give them a 2-0 record in district play following the 42-34 win on senior night.

“The seniors have meant a lot, they gave me a chance to move this program forward,” head coach Oliver Lucas said. “Without their leadership and without them buying in, we wouldn’t be able to have this kind of success.”

GRC is set to travel to Oldham County on Friday night as they take on the Colonels at 7:30 in a battle for the regular season division crown.

George Rogers Clark traveled to Harrison County Thursday night to compete for a shot to play in the 10th Region... read more