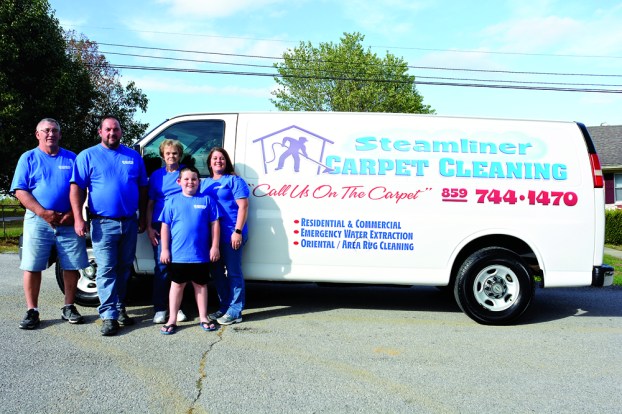 In the late 1960s, Millard Howard caught wind A&P was considering closing in the near future.

Millard, a Winchester native, had worked at A&P for a long time. With the news of closing in mind, he figured he ought to pick up some side work, his wife Shirlene Howard, said.

Shirlene said Millard was inspired by a friend of his who worked in carpet sales. Millard thought to himself, ‘If so many people are buying carpet, they need people to clean it.’

Millard and Shirlene worked the business together for several years; Millard eventually went to work for Winchester Farms Dairy and went back to working Steamliner part-time while Shirlene picked it up full-time following a layoff at Rockwell International in 1980.

Shirlene and Christine Sowder did the majority of the cleaning for a long time; Shirlene said some people were shocked women were doing the carpet cleaning.

Over the years, Shirlene and Millard would often bring their son, Shannon.

“I was cleaning carpet for as long as I can remember,” Shannon said, adding he remembers going on jobs when he was 8 years old.

In the summer of 1992, after Shannon graduated from George Rogers Clark High School, he decided to work with his father full-time.

“That’s what I grew up in,” Shannon said. “…  I graduated from high school on either Friday or Saturday evening, and dad said be ready to go to work Monday morning.”

In October 1992, Millard passed away, and Shannon was faced with a tough decision: close the business or keep it running.

“It meant a lot to work with my father that summer before he passed away,” Shannon said.

This year, Shannon celebrates 50 years of keeping Steamliner Carpet Cleaning in the Howard family alongside his mother. These days, though, he also has the help of his wife, Margaret, his 8-year-old son, Blake, and an employee of 21 years, Roger Phillips.

Perhaps the most memorable experience for Steamliner throughout its 50 years, Shirlene said, was in the 1970s or ‘80s. She and Sowder were called to clean carpets in a house that had been empty and for sale for about two years .

The real estate agent called Steamliner and off the ladies went with their carpet cleaning equipment. But once on site, it was clear the house had been recently occupied.

A foul odor wafted throughout the empty house, causing Shirlene and Sowder to cover their noses and mouths. A skunk had entered the house through a dryer vent, sprayed and left promptly before it could get a proper eviction notice.

Shirlene said it was the most disgusting smell she had ever encountered on the job, but Steamliner finally rid of it after hours of scrubbing and cleaning.

Shannon said there’s been other instances of critters making messes he has to clean up such as a wild turkey in a church, a car accident involving a deer, and more. He’s seen it all, he said.

Not much has changed in the business besides upgrades in cleaning equipment and supplies. The process is still similar to when Steamliner first started.

Today, Steamliner offers more services beyond carpet cleaning, Shannon said, and there seems to be more paperwork involved in owning a business.

For tips on how to maintain a clean carpet, Shannon suggests running the vacuum daily or near daily and then schedule a thorough carpet cleaning about once a year.

Steamliner started being more involved in the community in recent years, sponsoring baseball teams and more.

Over the 50 years, Steamliner has made quite a name for itself. There’s no shortage of clients, and people are constantly calling Shannon while he’s on the job.

“The phone rings all the time,” he said.

Shannon said customer satisfaction is the top priority at Steamliner, and that’s why his clients always refer Steamliner to others.

“We also try to make ourselves available for customers on their convenience,” he said.

“You’ll find a lot of loyal clients over the years,” Shannon said. “People will come back.”

These days, Steamliner is cleaning for the children and grandchildren of its earliest customers. The multi-generational business is now serving generations of clients, and that’s amazing, Shannon said.

“Around Winchester, there’s not a street or something nearby that I haven’t worked on,” Shannon said.

Charges from I-64 crash sent to grand jury

The case against a Lexington man who allegedly injured two others and himself in a crash last month are going... read more