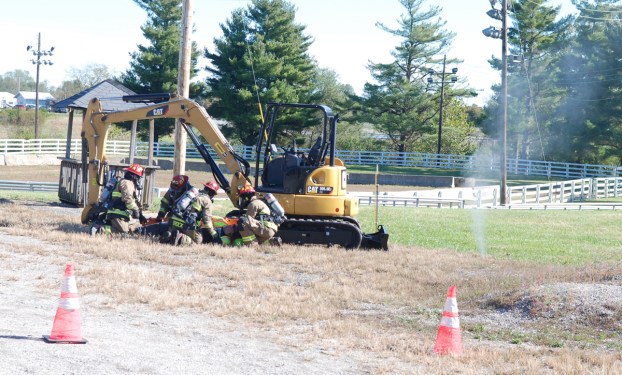 Clark County firefighters tend to a patient during a simulated natural gas line strike Thursday morning at the Clark County Fairgrounds. The demonatration is one of five scheduled seminars throughout the state this month. (Photo by Fred Petke)

Learning the right way to dig

Emergency officials, pipeline operators, contractors and utility employees got a firsthand look at what not to do while digging around buried pipelines Thursday.

The Kentucky Public Service Commission has organized a series of five utility line digging seminars across the state, including Thursday’s at the Clark County Fairgrounds.

“What we’re trying to do is get the message about following the proper process about excavating,” said Andrew Melnykovych, PSC communications director.

The commission assumed authority over natural gas lines and enforcement in July 2018. Since that time, the agency has received reports of more than 1,300 damaged lines from digging and assessed more than $1 million in fines.

Those fines, he said, are funding the educational series to stress following the proper procedure, including calling 811 before turning the first shovel of dirt.

More often than not, what gets damaged are smaller service lines, he said, though the consequences can be dire. One incident in Campbellsburg destroyed a church after a damaged one-inch natural gas line leaked into a sewer line, which then traveled up the hill to the church, where it was ignited by a pilot light inside, he said.

“It doesn’t take much,” Melnykovych said. “We’ve been extremely lucky in Kentucky so far.”

Following a seminar, about 130 participants from throughout the region watched demonstrations of the proper way to locate utility lines prior to digging, and the wrong way. In the demonstration, an excavator damaged a line which prompted a full response from firefighters and paramedics along with gas company officials.

Melnykovych said about 350 people have attended the three sessions so far, and two more are planned later this month.

In the late 1960s, Millard Howard caught wind A&P was considering closing in the near future. Millard, a Winchester native,... read more