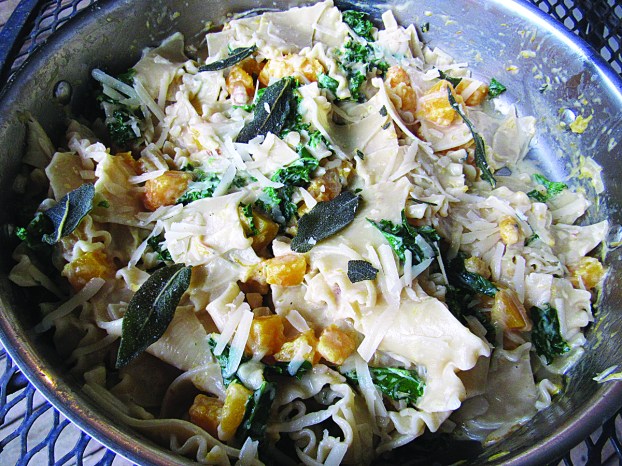 Nailed It or Failed It: Broken lasagna with butternut squash and kale

I  spotted today’s recipe for Broken Lasagna with Butternut Squash and Kale while looking trough the October 2019 Food Network Magazine.

A friend of mine bought me the magazine subscription and I look forward to receiving it in the mail. After looking through and reading everything in the publication, I leafed back through it to decide if I wanted to keep any of the recipes and this is one I tore out to try.

Bring a large pot of salted water to a boil. Heat a large skillet over medium-high heat and add the olive oil. Add the whole sage leaves and fry until crisp, 30 seconds to 1 minute. Remove with a slotted spoon and drain on paper towels; season with salt.

Add the squash and shallots to the skillet and cook, stirring occasionally, until lightly browned, 3 to 4 minutes. Add the chopped sage and season with half teaspoon salt and a few grinds of pepper. Add 1 cup of the boiling water and the heavy cream and bring to a simmer. Cook until the squash is tender and the sauce is reduced by half, eight to 10 minutes.

Meanwhile, add the broken lasagna noodles to the boiling water and cook, stirring frequently until tender, about 12 minutes. Reserve one cup cooking water, then drain. Add the noodles and kale to the skillet with the squash and toss to coat, adding the reserved cooking water as needed to loosen. Remove from the heat, add quarter cup grated parmesan and toss.

Divide the noodles among bowls. Top with fried sage leaves and the remaining quarter cup parmesan.

Since the weather is waffling between summer and fall, I wanted to start fall off right with a fall-looking dish.

I added almost every ingredient to my weekly grocery list and got excited just thinking about this recipe.

The recipe includes kale, which I don’t like because it’s green, but I didn’t think there would be enough in the recipe to matter.

While in the produce department during my shopping trip, I looked for a small butternut squash. After finding one, I weighed it and it totaled almost two pounds. I figured after peeling it I should end up with at least enough for this recipe.

I bought a pretty big bunch of kale knowing I’d need to remove the stems before using it and I needed four cups (I didn’t look for baby kale, I just bought a bunch of kale and tore it into small pieces after rinsing it).

I picked up two shallots, and after finding all of the other items on my list, I was ready to head to the check-out when I looked over my list one last time. I’d forgotten the sage leaves so I headed back to the produce department.

The evening before I was going to prepare the dish, I looked on the internet how to peel the squash. They suggested cutting a little off the top and bottom, then cut the squash in half at the lower part of the neck. Next you use a potato peeler to remove the skin, not leaving any green on the flesh.

To my surprise, this was really simple. The skin of this squash isn’t hard like spaghetti squash, and in no time, I had it peeled, the seeds removed and was able to cube the squash into bite-size pieces. I ended up with a little more than three cups.

I placed the squash pieces in a sealed container and moved on to rinsing the kale, removing the stems and tearing the leaves into pieces. Then I just stored them in a large plastic bag.

When I got home from work the next night, I started boiling water and heating oil in a large skillet.

I rinsed the sage leaves and added six large ones to the hot oil. In no time, the leaves were crispy (I’d never heard of frying sage leaves). I removed them to a paper towel and added the squash and thinly-sliced shallots.

I stirred the two quite a bit. It took longer than anticipated to get the squash browned. I added the remaining chopped sage leaves, some salt and a little pepper.

The pasta water was boiling, so I scooped out a cup and added it to the skillet then poured in the heavy cream.

I gave everything a gentle stir then broke the lasagna noodles into large pieces and put them in the boiling water. While breaking up the pasta, I kept wondering if this was going to be too much.

When the pasta was done, I removed a cup of the water and set it aside then drained the pasta. It sure looked like a lot of lasagna noodles to me. Once drained, I poured the lasagna into the skillet and added the kale. I stirred and decided to add about a quarter cup of the pasta water to the dish along with the freshly-grated parmesan.

Everything looked good, but it still looked like a lot of pasta.

I was surprised I really didn’t mind the kale in this dish; it wasn’t slimy at all.

We both thought this dish was good.

I asked Brad if he thought it had too much pasta in it and he said he thought maybe a little but next time we could just add more kale and that would probably help. He also mentioned that adding some of his shiitake mushrooms and some bacon would send the dish over the top.

There certainly was enough of this dish to have leftovers the next night and Brad did add more kale to the dish along with frying some bacon to crumble over the top. Both were good additions to the second go around and balanced out the pasta.

The recipe states this dish serves four, but as a side dish (we had baked chicken with it) it will serve a lot more.

This dish didn’t disappoint and I definitely nailed it. I’ve added it to my self-made cookbook and am looking forward to making it again as the days grow shorter and the temperature goes lower. I’ve noted that additional kale is recommended, or I guess I could just use less pasta.And I haven’t forgotten Brad’s other suggestions — shiitake mushrooms and of course crisp bacon to crumble on top.

Nailed It or Failed It: Barbecue ribs

I was trying to come up with something different for supper when I found this recipe in my stash. I’d torn... read more