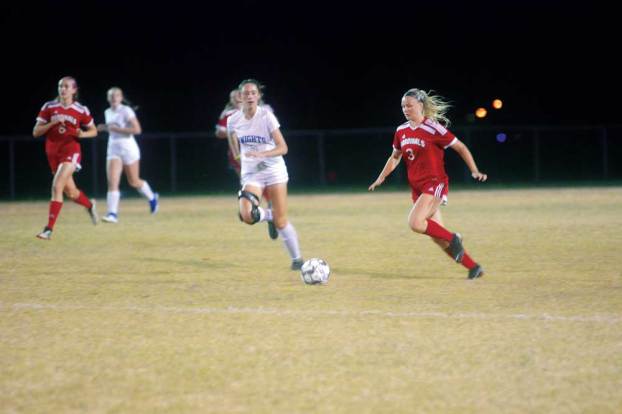 Delaney Manning’s career as a Lady Cardinal came to an end Tuesday night as GRC fell to Lexington Catholic. Manning finished the season as the leading-scorer for GRC, picking up 39 goals, the 16th most in the state. (Photo by Roman West)

George Rogers Clark hosted the first round of the state tournament on Tuesday night, their fourth consecutive year in the tournament.

They were matched up with Lexington Catholic, a team that beat them 3-0 in the regular season. This game was different, it was at their home stadium and on grass, neither of which happened in their first matchup.

The Lady Cardinals found themselves playing a lot of defense in the first half as Lexington Catholic possessed the ball the majority of the time and had lots of luck keeping it in their attacking third.

But GRC held strong and didn’t allow any shots to fall. Goalkeeper Carrie Stevens played a big role in this, picking up nearly 10 saves in the first half alone.

Caitlin Fike also made some big plays for the Cardinal defense with several crucial clearances.

While they were playing well on defense, so were the Lady Knights, allowing only two shots from the potent GRC offense in the half.

The two teams found themselves knotted at zero heading into the locker room with both teams needing to find a way to score to avoid being sent home for the rest of the season.

GRC’s offense came alive early in the second period, with two shots nearly falling in the first five minutes, including a shot from Shelby Vaughn that hit off the crossbar.

But the tides took a turn for the worse when Lexington Catholic was awarded a penalty kick minutes later.

GRC’s goalie made the correct read on the ball but even with her outreached arms, the ball snuck in the goal, giving the Lady Knights the first score of the game.

The Lady Knights’ backline kept almost every Cardinal pass from getting through, but GRC started to figure it out and they started to get more opportunities to score.

Their best chance came with seven minutes to play and Leslie Hernandez was awarded a free kick a few yards outside of the box. She sent a rocket straight into the goal and everyone – the fans, the coaches and her teammates – went crazy. However, the shot was called back as the referee said it was an indirect free kick and Hernandez wasn’t allowed to shoot it directly into the goal.

But GRC didn’t give up and kept battling until the end. It would turn out to be too little too late as the Lady Knights were able to escape with a 1-0 victory.

The Lady Cardinals finished the season scoring 140 goals, the second-most in the state heading into the first round of the state tournament. They finished 19-7-1, their most wins dating back to at least 2000 (the furthest back KHSAA’s website lists). The team outscored opponents in the postseason 31-2 with their only loss coming to Lexington Catholic.

The team will lose to seniors to graduation, Delaney Manning and Caitlin Bowling.

“We’re a program that works and everyone contributes but it’s hard to not look at their accomplishments. Four straight district championships, four straight region championships,” Abner said. “They were captains this year and they did it well and brought us together at the end.”