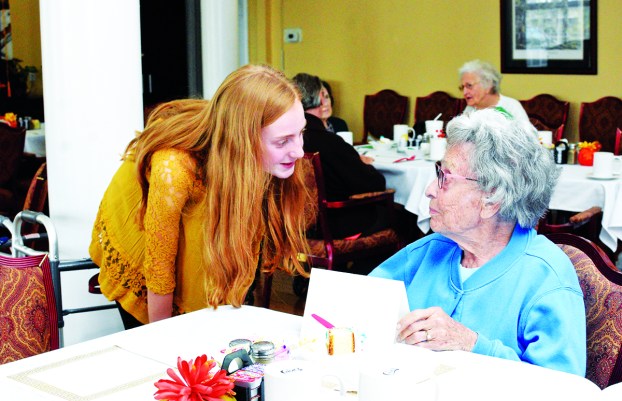 Mallory, 12, is a seventh grader at Campbell Junior High School enrolled in advanced courses, which means she gets to do a project for Amazing Shake. Campbell’s Amazing Shake program is inspired by the national program that teaches students professional, discipline and soft skills such as interviewing, respect, eye contact and a proper handshake.

At Campbell, students also have to complete a community service project.

Amazing Shake started at Campbell last year with seventh graders in advanced classes completing a community service project during which they collected hygiene products for veterans and put together a project for the school’s annual Veteran’s Day program.

About 60 students later went on to compete in an in-house Gauntlet competition, during which students went through various stations such as dialing numbers on a rotary phone, handling disgruntled customers, making a pitch for Cactus Pepper Hot Sauce and more to test the soft skills learned throughout the year. Winners from that competition moved on to other rounds such as a speech competition and an interview with Ale-8-One.

Leah Adams, a seventh-grade social studies teacher at RDC, previously told The Sun she and other staff learned about Amazing Shake while visiting Mason County schools.

Mallory chose to make birthday cards for residents at Rose Mary C. Brooks Place. Mallory is making about 50 birthday cards and will deliver them throughout the year. Mallory said she’s not quite finished making the birthday cards yet, but she’s put a solid eight to 10 hours into her project this far.

She also sang at the monthly birthday party Monday, performing “How Great Thou Art” and “Peace in Christ.”

“I chose this project because I really wanted to make them feel good, make them feel special,” Mallory said. “I wanted to show that even though there’s a big age difference between us, we can still have a conversation. I can still get to know them.”

Each week, Mallory checks in to share the progress of her project with her teacher. At the end, she will give a presentation about what she’s done.

Mallory said she’s sung at Brooks Place in the past as part of other groups, but this is the first time she has volunteered there on her own, though she has been involved in community service previously, volunteering for homeless shelters, Grace Bible Church and The Salvation Army.

Mallory said she’s thankful for her mom who helped print birthday cards and her teachers who helped her narrow down her ideas for the project.

“My favorite part is really just knowing that once I’ve given this birthday card, it will make their day and make them feel really good,” Mallory said.

Mallory said the hardest part of the project has been making the cards as it is time-consuming.

Mallory’s mother, Juliann Jones, said she has seen so much growth in Mallory since Mallory started the project. Juliann said she has seen her daughter come out of her shell in regards to talking to people in authority or who are older.

“I think you should just talk to them and really get to know them,” Mallory said. “If you sit down and have a conversation with them and just listen to their stories, you’ll feel more comfortable.”

Mallory plans to compete in the school’s Amazing Shake competition, with the hopes of making it far enough to attend the national competition at Ron Clark Academy.

Mallory said she may continue making birthday cards or perhaps Christmas cards for residents in the coming months or year, and she can’t wait to deliver the cards each month.

Besides making the birthday cards, Mallory fills her free time with other commitments such as mock trial, soccer, volleyball, musical theater and more. When she grows up, Mallory said she hopes to be either an architect or an attorney.

In the meantime, Mallory hopes to give back to others through small acts of kindness, and she hopes her peers and others learn that from her project, too.

“I think they should get that even if you do a small act like just making a birthday card, it can really make someone’s day, and make them feel really special,” she said.

A Winchester family got a scare Saturday afternoon when a man allegedly entered their home through the back door and... read more