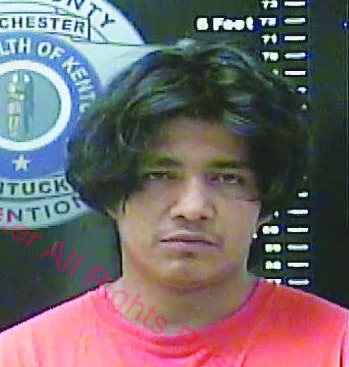 A Winchester family got a scare Saturday afternoon when a man allegedly entered their home through the back door and eventually locked himself in the bathroom.

According to court documents, Winchester Police officers were called to 3614 Stamper Drive Saturday afternoon when a man inexplicably entered the house and refused to leave.

The victim told police the man, later identified as 26-year-old Carlos A. Cruz Dominguez, walked in through the back door of the home, scaring her son. The victim said she confronted the man and threatened to call the police, but he refused to leave. She said the man headed toward the garage. When she tried to lock him in, he pushed past her and locked himself in the bathroom.

When officers arrived, Dominguez was still in the bathroom. When they opened the door, Dominguez was totally naked, according to the citation. Dominguez was arrested for second-degree burglary and first-degree indecent exposure and transported to the Clark County Detention Center.

Officers said Dominguez became belligerent and acted out against deputy jailers, who had to place him in a restraint chair to bring him under control.

During his arraignment Monday in Clark Circuit Court, a not guilty plea was entered for Dominguez. He is now facing a preliminary hearing Oct. 30. His bond was set at $5,000 cash.

Mud flew everywhere as drivers crashed into one another in the pit Saturday during the demolition derby at the Clark... read more