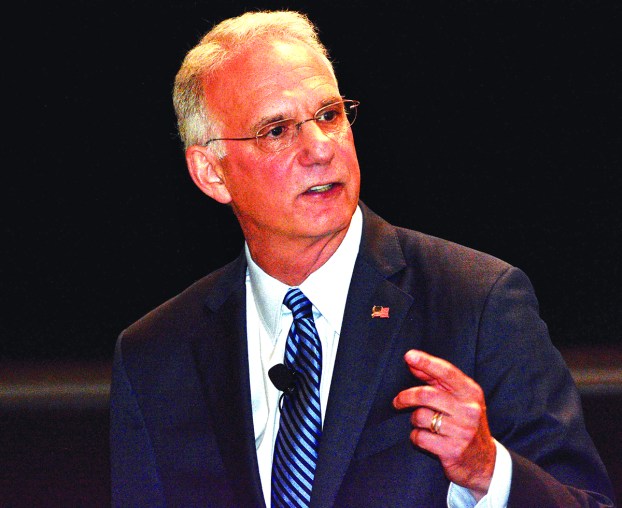 Rich Harwood, the keynote speaker at AMBITIONFest!, tells Clark County how to keep up the momentum in enacting change in the community Monday at the Leeds Center for the Arts. (Photo by Lashana Harney)

Three years ago, it was clear Clark County was divided.

Now, Clark County is taking it one step at a time toward unity.

Rich Harwood, president and founder of the Harwood Institute, spoke at length about Clark County’s progress, which is outlined in the new report, “One Step at a Time: Winchester and Clark County Seizing the Moment,” during AMBITIONFest! 2019 Monday at Leeds Center for the Arts. The report is now available to read on The Harwood Institute’s website, theharwoodinstitute.org and at clarkambition.org.

“Why?” Algire asked the crowd. “Because investments in people are evergreen instruments and people can impact not just one issue or moment in time, they can impact over the longterm.”

Algire told The Sun GCF hosts the AMBITIONFest! regularly to celebrate exciting happenings in the community. The last event was in 2017.

About three years ago, GCF commissioned the Harwood Institute for Public Innovation to conduct conversations with a diverse group of nearly 150 Clark Countians. The residents talked about six key issues they believed required change in the community.

“Waving the Community’s Flag” came out of those conversations. In the report, readers saw a community at a crossroads. The community was divided by race, class, religion and substance abuse.

Community members stepped up and formed groups and projects such as Upward 40391, Better Together Winchester, Winchester Inspired by Nature, Achieving Recovery Together and more.

The Sun will feature more about these projects in a four-part series to publish each weekend beginning Saturday.

Algire showed videos of these various groups and the impact they’ve made in three short years.

“Our community is taking action, one step at a time,” Algire said.

Algire highlighted these efforts as the community continues to move forward, primarily focusing on the 75 public innovators who have done work throughout the community for the last couple of years. Algire also recognized What’s Your Ambition? grant recipients, adding GCF supported about 55 Ambition grants recently, valued at $350,000 of support.

Harwood told the audience the work Clark County is doing is phenomenal.

“Three years later, there has been amazing progress in Winchester and Clark County,” Harwood said. “I hope to God you’re proud. I can tell you that in my 30 years of doing this work, I have not seen a community make this much progress starting where you started three years ago and where you are today.”

“This is so important not just for our country, but for America,” he told the crowd. “We live, as you know, in divided times. We are polarized as a people. We are at each other’s throats all too often. Too many of us are hunkered down and have retreated from one another and have turned our backs on one another and are pointing fingers at one another. And it seems to me that we have a choice: we accept what’s happening in our country or not. And I’m here to say tonight as clearly… as I possibly can, we do not need to accept what’s happening in our country today.”

Harwood told the crowd Clark County can do better. Community members should — and must — step forward and demonstrate the best in and of themselves, he said.

“I think the greatest issue this country faces is wondering how we will believe in ourselves and one another that we can come together and get things done,” Harwood said. “… Tonight, you’re demonstrating that it’s possible in a country that is polarized for people to come together, and the work that you’re doing is important, yes for Winchester and Clark County, but it’s also important for the state of Kentucky and for other communities to see and hear and find out about.”

America needs Clark County to succeed, Harwood said. Clark County is an example to the rest of the country, he said, and while people are still struggling and the issues aren’t gone, Clark County has made leaps forward.

Harwood told the crowd about his personal struggles as a child. When he was born, he was diagnosed with cystic fibrosis. In the early 1960s, that was a death sentence.

“Nobody expected me to make it this far,” Harwood told the audience. “There was a point at which the doctors turned to my mom and said, ‘He’s a lemon.’”

Most of Harwood’s childhood and a good chunk of his early adulthood was spent in hospital beds. He relayed vivid memories of doctors, nurses and specialists surrounding his bed, talking about him but never to him.

Harwood said he is haunted by those hospital rooms.

It wasn’t until three men in his neighborhood in New York took Harwood under their wings and showed him he could climb that ladder; he could build things and be a creator.

Harwood went on to tell the crowd dignity is a birthright. It’s non-negotiable.

“Will we give people dignity and will they have real hope?” Harwood said.

Harwood said Clark County needs to answer those questions when moving forward. He went on to share once again some of the stories outlined in the “One Step at a Time.” He said to keep the momentum going, Clark County must continue to turn outward, act as doers and take back the community’s shared story.

“Frankly, there are so many of us waiting for somebody to come save us,” Harwood told the crowd. “We’re the ones we’re waiting for. We’re right here.”

Harwood said people also need to move on from the past.

“When I came to Winchester and Clark County three years ago, this was the story I heard… ‘we got to look back to our bygone days and figure out how we can reclaim them,’” Harwood said. “As many of you know, your bygone days weren’t so great for a whole lot of folks.”

Harwood said people shouldn’t look backward to reclaim something that not everyone even wants anymore but rather people should look to create a future everyone does want, a future that reflects the best of the best in people.

If people want to dig deep to find out people’s shared aspirations, they must also be ready to hear people’s angers, frustrations, sorrows, rage and more.

“We need to have the courage and the humility to stand in the space with one another and hear each other speak about our lived experiences and stay in that space long enough to begin to understand one another and reach across the divisions and start to work together as one,” Harwood said.

Attendees also took home Harwood’s new book, “SteppingForward,” as well as the “One Step at a Time” report.

Algire ended the night with an invitation.

“I want to close with an invitation to love, but not just any love,” Algire said. “I invite you to practice radical love, a love that leaves no one out. The challenges of our time will not be solved by surrendering to fear and anger. The challenges of our time will be solved by love, empathy and creative energy, by an acknowledgement that we are all worthy. From radical love. Radical love is rooted in the knowledge that our origin is the same. The matter comprising our bodies is the same. We are, all of us, connected to the same source.

“Radical love is being turned outward. When we turn outward, we turn toward each other. Radical love is unconditional. It is recognition. It is free from judgment and assignment. It is an acknowledgement of inherent worth. If we are all worthy, then surely we are all one.