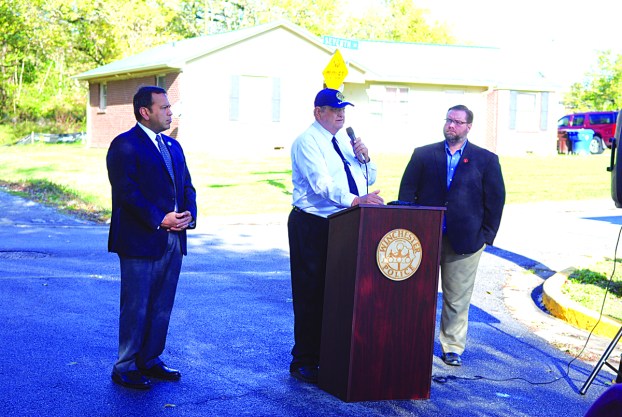 The long-awaited Seventh Street truck route got a financial boost when state transportation officials awarded $500,000 for the project Tuesday.

The funds will come from the Rural and Secondary Road Fund’s discretionary funds to cover the costs of design, obtaining rights-of-way and mapping utility lines for later relocation.

When completed, the project will offer an alternate route for heavy truck traffic from local industry and move it away from Seventh Street, which runs through a residential neighborhood.

“We needed start-up,” state Sen. Ralph Alvarado said during Tuesday morning’s announcement at the corner of Seventh and Evans streets. “We had advocated for a larger amount. We wore everybody down and we were able to get that.”

The project has been a high priority for city and local officials since the first of the year, after years of discussion.

“It’ll finally put it on the launching pad to get that started,” Alvarado said. “It’s finally starting to come to fruition.”

The route, which was approved years ago, will build from the intersection with Maple Street and Veterans Memorial Parkway and parallel Interstate 64 by Gate Precast and Freeman Corporation.

The entire project is estimated to cost around $3.5 million, Alvarado said, but there are legal hurdles to clear.

Earlier this summer, the Winchester Board of Commissioners voted to begin legal condemnation proceedings to obtain a large, necessary tract of land for the project.

“There are several parcels that will not be difficult to acquire, but there is one significant parcel that will require litigation,” Burtner said. To date, nothing has been filed, he said.

Residents are hopeful the promised funds mean the project will be completed quickly, after decades of complaining and waiting.

“It means a great deal,” Evans Street resident Sammie Clay said. “We’ve been working on this project for 30 years.

“It’s been a long time coming. At one point, I never thought I’d live to see this happen.”

Between the dust and noise from the truck traffic, there’s also the concern of meeting a truck on the narrow streets, he said.

Given the long history, some are reserving their enthusiasm.

“We’ve heard this many times,” resident Joyce Morton said. “I’ve gotten so many promises for 30 years. This is great, but it’s just a drop in the bucket. I’m hopeful but I’m leery. It’s cautious hope.”

Local firefighter wants to pass on love for the field

Joe Wheeling has been a firefighter for almost a dozen years, and can’t imagine doing anything else. He’s trying to... read more