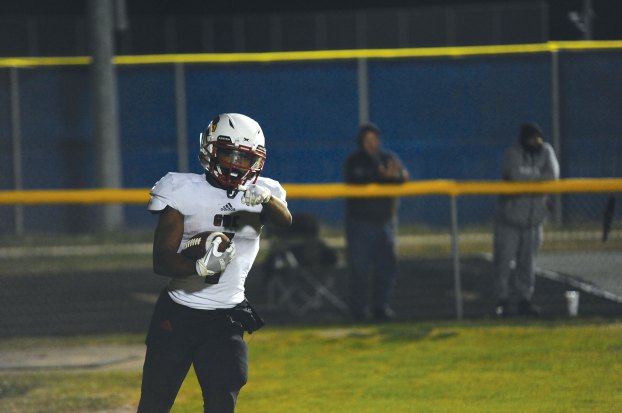 Azariah Israel scored three second-half touchdowns, including this 65-yarder, to help lift the Cardinals to their first district title in 10 years. (Photo by Derek Brightwell)

Every coach preaches winning all three phases of the game — offense, defense and special teams — and in the second half of George Rogers Clark’s 28-26 victory over Oldham County, all three phases stepped up to make big plays.

“That’s because our kids stepped up and our leaders stepped up,” GRC coach Dr. Oliver Lucas said. “I’m just telling you, it was outstanding. Everything the kids did — every aspect of it.”

The first happened in the third quarter when running back Azariah Israel broke free for a 55-yard touchdown run on the second play of the half to tie the game at 14.

“How bout that number one? Shoot,” Lucas said with a big grin. “That’s a special person. That’s a different animal. That’s who he is. He’s a guy that when the lights are brighter that’s when he plays his best. We know who our bread and butter is. We know what we do.”

On the next drive, the Colonels were able to put together a five-minute drive to take the lead, but Tye Boyken broke through the line on the PAT attempt to block it, cutting the Oldham lead to six points.

After Israel capped off a nearly four-minute drive for the Cardinals with a one-yard touchdown to put GRC up 21-20, the big defensive play happened. On third and 10, a gang of Cardinal defenders sacked Oldham quarterback Sam Young for a huge loss that forced the Colonels to punt.

It took one play for Israel to push the lead to eight points as he went through a massive hole on the right side of the line and scampered 65 yards, nearly untouched for a touchdown with just under three and a half minutes remaining

But Oldham wasn’t going to surrender the regular season district title without a fight. The Colonels marched down the field and scored on a 20-yard run by Young to give them a chance at overtime with only 2.7 seconds left. But the Cardinals were able to stop the two-point conversion attempt to get the win.

“We’ve been there before. That was the difference,” Lucas said about the two-point attempt. “Our defense has seen that movie. They’ve had to make plays like that all year so when they get in that situation again, they just rose to the occasion.”

Lucas said that the one thing he was preaching to his team was to not let the circumstances of the game change them. And that was put to the test in the first half. Entering the locker room, the Cardinals were down 14-7 and had committed three turnovers in the first two plays.

“We never got caught up in that moment,” Lucas said. “That’s what I was talking about with focus. We couldn’t let any circumstance or anything that wasn’t going our way. We knew we had to keep playing and if we kept playing, the system would work out. Our whole team — defensively, offensively — they made the plays they had to. We do what we do and that’s all we can do.

“That’s what it’s all about. I’m so proud of them. I’m proud of the community that came out to support us and everybody that hopped on the bandwagon to ride this thing with us. Our kids played emotion, emotion, emotion. They made the plays that had to be made.”

With the win, George Rogers Clark will host its first two playoff games and that means that there is a chance that Oldham County will be making the trip up for the rematch. That’s something Fox welcomes — and something Lucas is prepared for.

“That’s an outstanding team and an outstanding coach,” he said. “We knew the offense because he coached at Trinity and we’d coached against it. I had to go all the way back to 2013 film and find some stuff.”

George Rogers Clark’s football team will travel to Oldham County tonight to take on the Colonels for the district championship,... read more