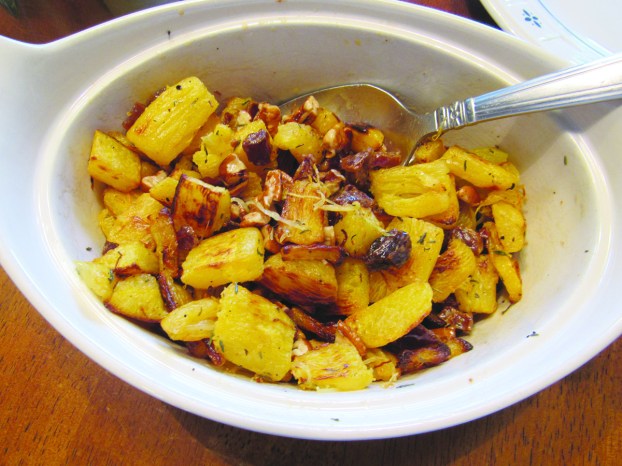 Spaghetti squash with dates and pecans

Nailed It or Failed It: Spaghetti squash with pecans and dates

I found this side dish recipe while reading my November 2019 issue of Food Network Magazine.

There were several recipes in the magazine that caught my attention, but this was high on my list because the two spaghetti squash plants Brad planted in the garden this year produced like crazy.

So far we’ve picked 13 squash and there are still some on the vines that aren’t quite ready to harvest.

We’ve given a couple of the squash to our grown children and we’ll probably give a few more away; the rest will go to the basement where it’s nice and dark and cool and we’ll use them all winter long.

We’ve discovered spaghetti squash keeps for a long time in our basement.

Spaghetti squash with pecans and dates

Roast on a preheated baking sheet at 450 degrees until tender and browned, about 45 minutes. Brown 1 tablespoon butter in a skillet over medium heat.

Remove from the heat and stir in 1/3 cup chopped pitted dates, 1/4 cup chopped pecans, 1/2 teaspoon fresh thyme and a pinch of salt; scatter over the squash.

Brad was going to prepare a roast, carrots and potatoes for our evening meal (he does a much better roast in the oven than I do) when I decided I’d fix this side dish.

The recipe didn’t say what size spaghetti squash to use. I opted for one on the smaller side since it would just be the two of us eating that night and  the recipe didn’t call for using a whole lot of butter, dates and pecans. I knew a smaller one wouldn’t overwhelm those few other ingredients.

The first thing I had to do was figure out how to peel the spaghetti squash. The skin on a spaghetti squash is tougher than a butternut squash, which I wrote about last week.

I thought a potato peeler would work. I tried it and it didn’t seem to faze the thing.

Then I thought I’d split it in half long ways and try to use knife to peel it. After splitting it in half, I scooped out the stringy insides and the seeds and tried to use a knife to remove the peel.

I was still having a lot of trouble,  so I cut each half in half like I did the butternut squash the week before. I also cut a little off the stem and butt end of the spaghetti squash so it would sit flat on the counter while trying to use the potato peeler again.

Voila, that worked, with a little effort. I was sure I had all the peel off when I could see the pretty flesh of the squash didn’t have any white or green left on it.

All I had to do then was cut the squash into chunks, put them in a bowl and toss with olive oil, salt and pepper.

The recipe didn’t give amounts here, so I just sprinkled some olive oil on and gave the salt and pepper grinders a few twists.

I heated the oven with a baking sheet inside. Once the oven was hot, I laid parchment paper on the pan and poured on the squash pieces. Into the oven they went for 45 minutes. After 20 minutes, I turned the chunks over so they would brown evenly.

About 10 minutes before the squash was done, I heated a little more than a tablespoon of butter in a small pan. While the butter was melting, I turned my attention to something else in the kitchen.

Brad came in from outside and said, “What smells so good, is it butter?”

I’d forgotten to watch the butter and I turned and grabbed the little pan off the burner. Thank goodness it was just perfect and hadn’t burned.

I poured in the chopped dates, pecans, 1/4 teaspoon dried sage (when you don’t have fresh herbs you can substitute dried, just use half what’s called for) and a pinch of salt, then gave the mixture a little toss.

When the squash came out of the oven, I scooped it all into a small bowl and poured the date and nut mixture on top. After a little stir, we were ready to eat.

The meal looked and smelled great. After Brad prayed, I scooped out a couple spoonfuls of the squash dish and quickly took a bite.

The sweetness of the dates and the crunch of the pecans were a great addition to the squash. It was so good. Brad agreed it was good.

Of course, the rest of the meal was delicious, the roast was so tender it almost melted in our mouths.

This new recipe for spaghetti squash is a definite Nailed It. It was one of the easiest things I’ve ever prepared.

Since we’ve got plenty of spaghetti squash, this dish just might show up on our Thanksgiving table. I’ll just use a bigger squash and add more dates and pecans. I can hardly wait.

Nailed It or Failed It: Broken lasagna with butternut squash and kale

by Sarah Condley I  spotted today’s recipe for Broken Lasagna with Butternut Squash and Kale while looking trough the October... read more