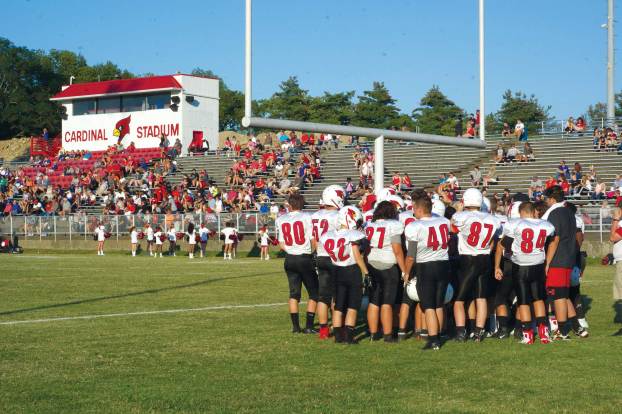 The RDC Cardinals huddled up before they kicked off their 2019 football season with a huge 50-0 win over McNabb. (Photo by Roman West)

Editor’s note: As fall sports wind down, I have decided to reflect on the top five moments from the season. Each day this week will feature one of the five best moments, beginning today with what I consider the fifth-best and concluding Friday with the best moment of this year’s fall athletics.

The stands were filled, fans lined the fence row in their cars to watch the game and concession lines were backed up as Robert D. Campbell Jr. High kicked off the 2019 football season here in Winchester as the old Cardinal Stadium saw the town’s first football action of the year as it had many years before.

A community that had been without football for nine months was gnawing at the bit to see their Cardinals hit the gridiron and so was their first-year coach as he came out to lead the team in his first game against McNabb Middle.

The offense exploded and the defense was strong for the Cards, putting up 50 points in their shutout victory.

While the rest of the season had its ups and downs, the opener was a night the kids won’t soon forget.

“These guys have put in the work and they’re doing all the right things,” then-head coach Tony Lanning said of the team after the game. “For them to come out here and play a game in all three phases like that -– I’m just so happy for them.”