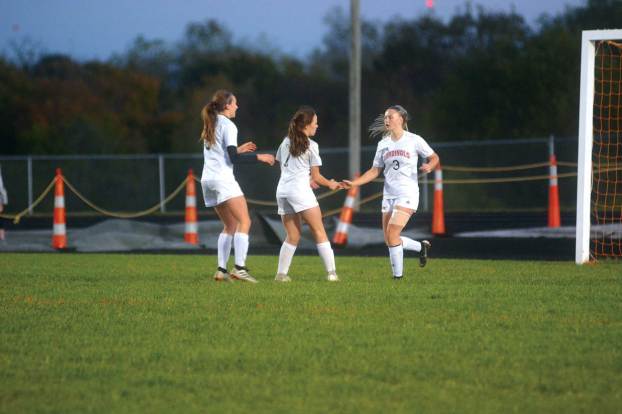 Allie Bush (center) and Delaney Manning (right) were a force to be reckoned with all season long as they led their team to a fourth consecutive region championship. (Photo by Roman West)

The accolades continue to roll in for the George Rogers Clark girls soccer team.

The two girls finished as the top two scorers on the GRC team this year.

Manning led the way for the Lady Cardinals with 39 goals, the 16th-most in the state.

Bush finished with 23 goals and added on 14 assists, the second-most on the team.

This is the second straight season for Bush on the first team and her third year of being selected for the all-state team after an honorable mention her freshman year.

Manning made the team last year as an honorable mention and was selected as this year’s 10th Region offensive player of the year.

Manning has played her last game as a Lady Cardinal but she and Bush will have the opportunity to play one more game together in the Kentucky All-State Showcase.

Editor’s note: As fall sports wind down, I have decided to reflect on the top five moments from the season.... read more