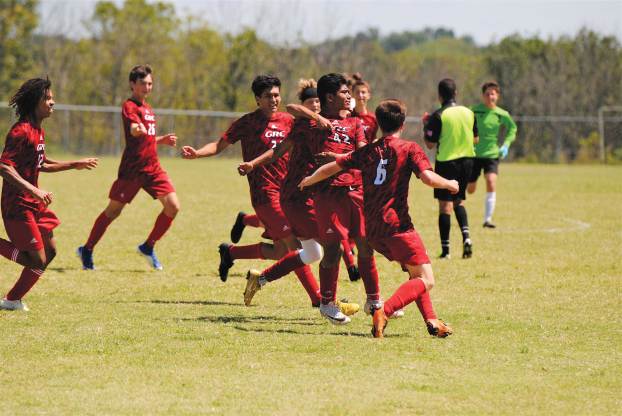 Brandon Beltran (42) is met by the entire Cardinals team after he scored the go-ahead goal to complete the GRC comeback against Conner. (Photo by Wes Carrington)

Editor’s note: This is part two of a five-part series of the best moments of the 2019 fall sports.

George Rogers Clark’s boys soccer team had one of their best seasons under first-year head coach Nicholas Vogler, finishing the season 16-4-2, their most wins since reaching the state championship game in 2007 and matching their win total from the previous two seasons combined.

The first-year coach preached one message to his team from the time he accepted his new position: mental toughness.

After an undefeated preseason and winning the first three games of the regular season by a combined score of 10-0, the Cardinals had to display their mental toughness for the first time in a game against Conner.

“From day one, before I even got to see them on the field, I told them the number one thing I expect from them is mental toughness,” Vogler said. “We’ve kind of been grinding that into their brains over the last two months and it showed a little bit today.”

The team surrendered their first goal of the season and ended up down 3-0 by halftime. But Vogler continued to get his team to be mentally tough and the Cardinals came out in the second half ready to fight.

Freshman Brandon Beltran, who had scored five goals through three games, scored the first goal for the Cardinals to cut into the lead. A second goal from Beltran brought them to within one, but time was winding down.

The legend of Beltran continued throughout the season as he led the team in goals with 31, the 17th-most in the state. He also finished with the second most assists on the team with 12.

The Cardinals’ mental toughness led them to their deepest postseason run in five seasons with a chance to compete for the region championship.

Editor’s note: As fall sports wind down, I have decided to reflect on the top five moments from the season.... read more