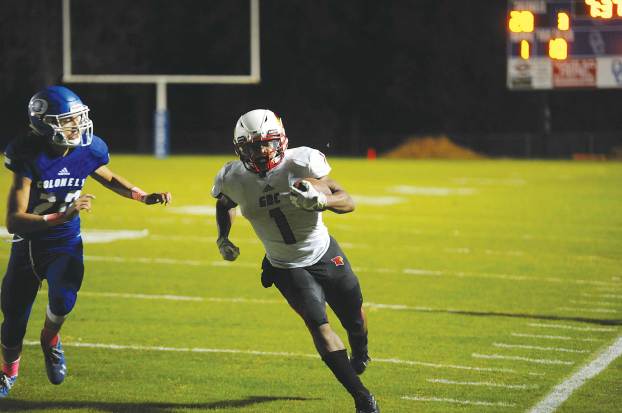 GRC’s Azariah Israel carried a big load for the Cardinals’ offense in district play, rushing for 710 yards and 10 touchdowns in three games. (Photos by Derek Brightwell)

The George Rogers Clark football team has seen some rough times before ‘the program-builder’ Dr. Oliver Lucas in 2017. The team had only won one game in the two seasons prior to Lucas’s arrival, but times have turned since then.

A combined record of 12-10 heading into the year and following the team’s first winning season since Paul Columbia was the head man back in 2009, expectations were high for the Clark County team this year.

An opening night loss in Northern Kentucky put the Cards slightly behind schedule but won their next two games to get above .500.

A couple of heartbreakers and a blowout to one of the state’s best teams, Ballard, but the Cardinals behind the eight-ball again as they sat at 2-4 heading into district play.

But the program-builder was able to get his team to continue to play hard and buy into what they needed to be successful the rest of the season.

A 56-19 win against Bryan Station and a 42-34 victory against Madison Central set the Cards up with a game against Oldham County, who had also beaten those two teams to go 2-0 in district play, for the regular season district title, a feat the Cardinals hadn’t accomplished since that 2009 season.

The game saw the Cards fall behind 14-7 at halftime, but they didn’t fold.

They fought back to take a 28-20 lead in the fourth quarter thanks to three second-half touchdowns from Azariah Israel.

But the Colonels wouldn’t fold either and scored a touchdown with 2.7 seconds left to set up a two-point conversion attempt to send the game in overtime.

Oldham County quarterback Sam Young stepped up to throw but the GRC defense held strong to secure the win and the top seed in the district in the playoffs.

“We knew we had to keep playing and if we kept playing, the system would work out. Our whole team — defensively, offensively — they made the plays they had to,” Lucas said. “I’m so proud of them. I’m proud of the community that came out to support us and everybody that hopped on the bandwagon to ride this thing with us.”

Editor’s note: This is part two of a five-part series of the best moments of the 2019 fall sports. George... read more