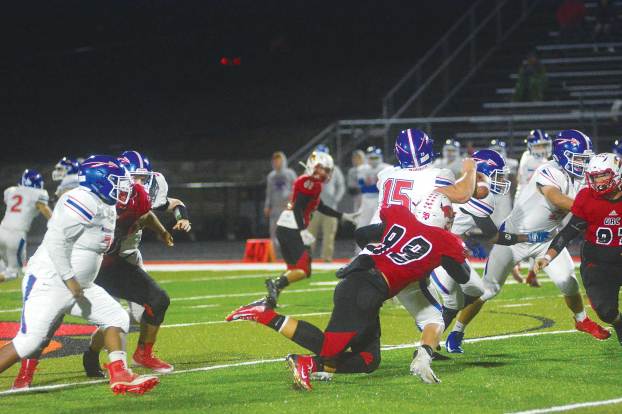 The George Rogers Clark football team will take on an opponent they’ve never faced in school history for the second consecutive week when they travel to Hebron tonight for a matchup with Conner.

The Conner Cougars (7-2) are one of 5A’s best teams with a .611 Ratings Percentage Index (RPI), the seventh highest in the class.

The two teams had three common opponents this season, Madison Central, Dixie Heights and Cooper. Conner went 3-0 in their matchups against the teams by a combined score of 97-35. The Cardinals went 1-2 with their lone win against Madison Central as GRC was outscored by a margin of 68-90 against the three teams.

The biggest disparity between the common opponents came against Dixie Heights. The Cardinals lost 35-12 in their season opener as Conner rolled the Colonels 35-0.

Currently, George Rogers Clark sits at 18th in RPI in 6A, so hosting a third or fourth round is game is unlikely should they make it that far, but a win against Conner would surely bump them up a few spots heading into the playoffs.

Conner quarterback Jared Hicks has been electric this year, throwing for 1982 yards with 15 touchdowns and has added 282 yards and 9 touchdowns on the ground. His 220 yards per game average through the air is the most in 5A.

The Cardinals’ secondary has been stout all year long, giving up only 119 yards per game through the air this season.

The pass-rushing duo of Trace Mitchell and Jaylynn Johnson has led the way for the Cardinals’ defensive pressure. The two have picked up 9.5 sacks between them out of the team’s 21 total. Mitchell (five sacks) is tied for 15th in 6A while Jaylynn Johnson (4.5 sacks) is not far behind. The team is currently sixth in 6A in sacks.

The Cardinals’ offense will likely run through Azariah Israel as it has for most of the year. Israel is currently tied for fourth in the state for most rushing yards and rushing touchdowns.

The George Rogers Clark football team has seen some rough times before ‘the program-builder’ Dr. Oliver Lucas in 2017. The... read more