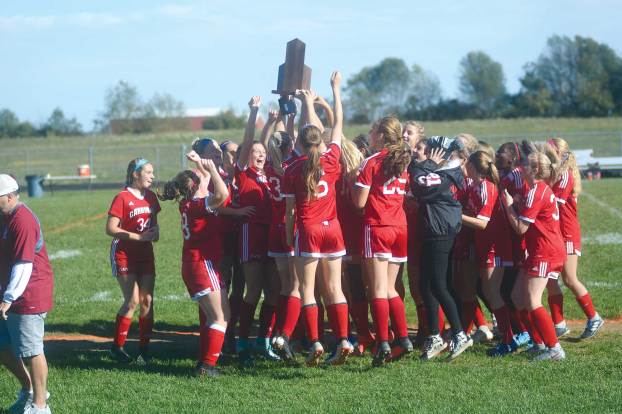 George Rogers Clark’s girls soccer team headed into their 2019 campaign after winning three consecutive district and region titles and were looking to send their seniors off with grand slam, winning both postseason titles all four years of their GRC careers.

The team finished the regular season 14-6-1 with an unblemished district record and a 6-1-1 record throughout the 10th Region.

The Lady Cardinals opened the postseason with a matchup against Paris in the district tournament. The 10-0 win started the team’s postseason dominance that continued in the next game, the district championship, a 3-1 victory against rival Montgomery County. The championship gave head coach Matthew Abner his sixth district title in seven years.

After a draw that forced GRC into a three-game region tournament, the Lady Cardinals earned their second 10-0 mercy-rule victory of the postseason against St. Patrick.

Their second round matchup was against Campbell County, who they tied in the regular season. The potent Cardinals’ offense showed up again, picking up three early goals en route to a 5-0 victory.

After their victory against the Camels, Bishop Brossart was the only thing that stood between the Lady Cardinals and their fourth consecutive 10th Region Championship. A slow start didn’t matter as the Cardinals put in three goals in the final 46 minutes to secure their championship and a spot in the state tournament.

“To see the smiles on the girls, to see how hard they’ve worked and what they’ve put into practices to earn another title it’s exciting,” Abner said after their region championship. “It’s very exciting to see them rewarded for their hard work.”

In what would’ve surely been number one on this list had they won, the Lady Cardinals battled Lexington Catholic in the first round. In a defensive battle, the Lady Knights put in a penalty kick in the second half to take a 1-0 lead. But the Cards kept battling as they had all season long. As time was winding down, Leslie Hernandez lined up to take a free kick for the Cardinals. The ball soared into the back of the net as her teammates and fans alike went crazy, only for the shot to be called back by the referee.

While the Lady Cardinals didn’t get to advance out of the first round of the state tournament, the season was still a historic success.

They scored 140 goals, the second most of any team in the state.

Senior Delaney Manning was 16th in the state in goals scored, was named 10th Region offensive player of the year and second team all-state.

The 2020 Lady Cardinals will feature several key contributors from this season’s team as seniors, including all of the players who made all-region besides Manning and Bowling, who were seniors this season.

“I’m very proud of what this team has accomplished this season,” Abner said following the team’s final game. “We went from giving up 50 goals this season to only giving up one goal in the state tournament on a penalty kick.”

The George Rogers Clark football team has seen some rough times before ‘the program-builder’ Dr. Oliver Lucas in 2017. The... read more