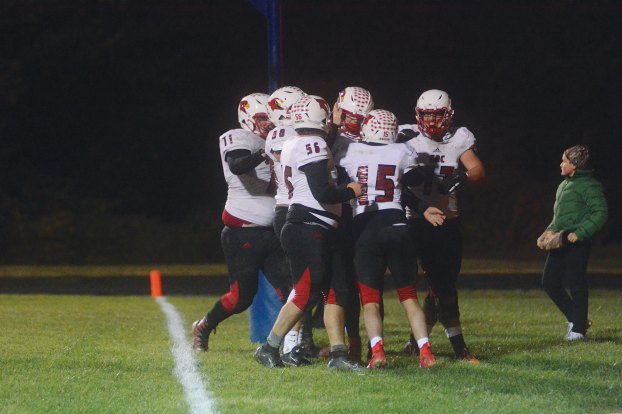 Jordan Manley is embraced by his team after picking up the go-ahead touchdown from a quarterback sneak with 0.2 seconds left to win the final game of the regular season. (Photo by Roman West)

George Rogers Clark’s football team took to the field for the regular season finale Friday night as they traveled to Hebron to take on the Conner Cougars in the first-ever matchup between the two schools.

The Cardinals got off to a lead early as Azariah Israel capped of a drive that took up half of the first quarter with a 16-yard run into the end zone.

“If you take away that seven we lose,” head coach Oliver Lucas said. “It was a big help.”

Conner’s quarterback Jared Hicks was able to get the Cougars on the board on their first drive by calling a hot route at the line of scrimmage, leading to a 72-yard touchdown passing touchdown.

The Cougars were unsuccessful in their two-point attempt, preserving the Cardinals’ lead at 7-6.

The second quarter saw both teams run into problems, but Conner more so than GRC.

The Cardinals fumbled in the end zone and Conner recovered, but the Cougars had trouble holding onto the ball after that.

Three consecutive snaps went over Hicks’s head, the last which was recovered by GRC’s Aquevion Lewis.

With time winding down in the half, GRC was able to put up points as Tye Boyken made a field goal to extend the lead to 17-6.

The Cougars began the second half with the ball and drove down the field for a touchdown but once again failed to convert the two-point attempt.

After a punt from the Cards, Conner took their first lead of the night on a 46-yard touchdown pass with two minutes left in the third and converted their first two-point attempt of the night.

GRC’s ensuing drive continued into the fourth quarter. The first play in the deciding period saw Jordan Manley find Dawson Gay for a 20-yard touchdown pass, putting the Cards back on top 24-20.

A couple of long plays for the Cougars got them in the end zone just a minute later and they retook the lead 27-24.

With six minutes to play, Israel burst through the line on a third-and-four from midfield to get them inside the red zone. The offense didn’t move on the next two plays, but Israel picked up another first down on third down, getting the Cards to the five-yard line. The next play, he picked up his third touchdown of the game to give the lead back for the Cards with under five minutes to play.

Conner wasn’t going out without a fight, and Hicks led the team down the field yet again. He scrambled four yards into the end zone and gave Conner the lead back with 2:50 left in the game.

The Cards marched down the field and with 11 seconds left, Lucas was faced with a decision. Fourth-and-four from the five-yard line, down three, Lucas elected to go for it.

Manley completed a pass to Don Wells at the goal line, but didn’t get in.

With four seconds left, the Cards had one more shot to win the game. Manley kept the ball and followed his offensive line into the end zone to lift the Cardinals to a 38-34 win.

“I went out there to tie the game, but the kids told me we didn’t come this far to get a tie,” Lucas said. “What can I do? At that point, it’s their call. The result is what it is.”

GRC’s playoff run begins on Friday as they host Madison Central at 7:30.